THERE MUST BE AN EASIER WAY TO DO THIS JOB –

BUT DON’T SHOW ME!

Despite tacking that sign up within a few weeks of starting at Michael’s Nook, I really did enjoy my time there, which on the first stint took me up to spring. I enjoyed it so much, I returned for two more stints in the following years.

I was already well-versed in both customer service and housework – I’d been at both since the age of thirteen – so my varied (dogsbody) duties at Michael’s Nook were no hardship. Plus I learnt so much in my time there; how polite society behaves, social and table etiquette, exposure to the finer things in life. Skills that came in handy as I climbed the corporate ladder and played in the big pond.

Michael’s Nook became my temporary home, and the people who worked there became my family. Here is a little of each one who was there in the winter of 1978.

Let’s start at the top of the tree with Reg Gifford, owner and proprietor. Well over six feet tall, he was the quintessential English gentleman of the landed variety (although I suspect his origins may have been humble). He was an antiques dealer who purchased the property in the late 60s, firstly as a private home, and then shortly after turning it into an exclusive country inn where the clientele were expected to feel more like house guests than tourists. Many of his antiques such as ormolu clocks and gilt-decorated furniture decorated the rooms. An eccentric, one of his party tricks was to ride his penny-farthing around the village on special occasions. He was also a lover of Great Danes, one of whom died while I was working there (not on account of me I rush to add!) Some of us stood vigil together with Mr Gifford as the dog slipped away. It was a very sad night for all of us.

In this photo, his wife, Elizabeth Gifford, is not hanging her head in shame, nor over-indulging in the glass of wine. She and “Giff” (only used behind his back) had come to our staff room to wish us Merry Christmas. It seems I have clicked the shutter at the precise moment she is laughing at a joke – a “mistake” not discovered until the film was developed. She was a lithe woman, always darting about, so it is not unusual that she would throw her whole body into the amusement. She was famous for her floral arrangements, one of which sat on a large round mahogany table in the entrance foyer, since turned into a dining area by the looks of this contemporary photo below. This angle is taken facing towards the front portico, and the doorway to the guests’ lounge on the right. There was a similar doorway on the left leading to the dining room. 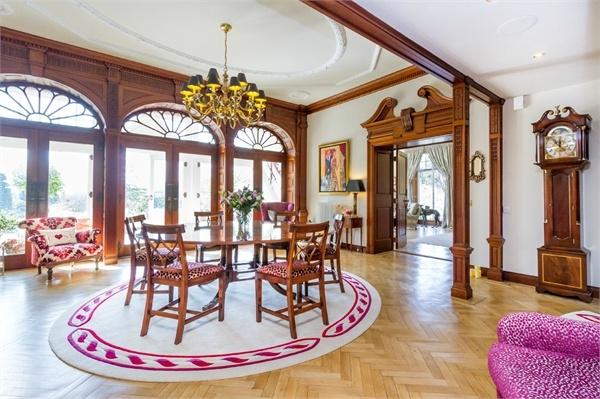 There was a secretary who handled reservations, correspondence and typing the daily menu. She was also in her early twenties, although for some reason I don’t have a strong memory of her, apart from her being slim and blonde, quite the opposite to myself.

The stars were in the kitchen. Nigel Marriage, the head chef about my age, a true temperamental professional who has dedicated his life to the art. The sous chef was Barry, and there were two sixteen-year-old apprentices, Simon and Paul. Barry was not of the physique to enjoy a walk, even though we were in Wordsworth and Beatrix Potter country, but the other guys took me off exploring. Here they are posing artistically for my camera. Not sure when this was taken, but clearly not December or January when I first arrived.

Coming down to we plebs, there were two other General Assistants, Maureen, a 17-year-old Geordie who’d been working there for two seasons; and Sandra, a 16-year-old who was a recent hire, like myself.

As you can see, the place was being run on teenagers and young adults, but living out of home in this type of working environment made everyone mature for their age; although I did despair that there was not much mutual conversation to be had with Sandra, who was heavily into her make-up and her love-life. Maureen, on the other hand, had just been engaged to a waiter in one of the local hotels, a union blessed by both sets of parents.

There was a lady from the village who came daily to run the upstairs section with one of us providing additional labour. She was a hard-working no-nonsense woman, a widow as I recall, perhaps in her fifties, slim build and tightly permed hair, her street clothes always hidden behind a work smock.

And then there was Percy, the gardener, a middle-aged chubby chap who’d lived all his life in the valley and had the accent to match. One day I was dishing up the pudding that always accompanied our midday meal, and I asked if he wanted some.

‘That’s nice Percy,’ I responded. ‘Now would you like some of this pudding or not?’ Turned out what he’d said was,

Maureen used to give me a giggle with her Geordie (Newcastle) accent too. After a busy shift, she’d flop into the nearest chair and say, “Ee, it’s sha’-erred, me.” Or at the lunch table she might ask someone to “Pass the bu’er.” Apparently there is no double-t in the Geordie dialect, maybe even no ‘t’ in the alphabet at all.

Not that I fared any better. After accidentally ordering “two qwiche” instead of “two quiche” Nigel teased me about my colonial accent.

‘What?’ I countered. ‘You guys live on an island the size of Tasmania and you can’t decide amongst yourselves how you are going to speak the language!’

Good humoured banter was part of our daily routine. It stopped us feeling sorry for ourselves 🙂

I’m not sure if I already mentioned the house has been divided into four luxury private dwellings. These two photos below show how the former elegant dining room has been converted.

I wrote home to my mother that guests paid an average of $35 per head per night for bed, breakfast and dinner. To put that in context, the job that I’d left earlier that year in Australia was paying $170 less tax per week. For their money though, guests at Michael’s Nook got the spoil to end all spoils; and the food was sublime, featuring in both the Egon Ronay and Michelin good food guides.

Meanwhile, downstairs, in the servant’s quarters . . . to be continued.

Here’s a hint though. Take a second look at the background of the photos of Mr and Mrs Gifford 🙂

49 thoughts on “The Minions of Michael’s Nook”