We’d dined at the Apollo Bay Hotel the night before. Social distancing was coming into force, not as stringently as it would become. The hotel was busy, but offered several dining areas, so it was easy to spread out. Over dinner, Bill and I discussed our travel plans. We had intended to dawdle around this stretch of coastline, lingering in popular coastal holiday places such as here, Lorne, and Torquay (past Bells Beach on the above map). The growing unease around COVID-19 has us wary, though. So, we decide to re-position ourselves to the east coast.

It will mean a long driving day, but with us alternating every two hours or so, on the good quality roads of Victoria, it will not be difficult.

Consequently, I have only a snapshot impression of Apollo Bay, which remains in my memory as a more sophisticated place that some of the quaint towns we have been through. Although its permanent population is around 1000, I read an article that five million tourists pass through here each year. The shops in the main street reflect that.

The Great Ocean Road hugs the coastline, twisting around steep headlands with spectacular views in both directions. It was hard to resist pulling into lookouts, but I had to, as we are “on a mission”. All along this route we pass cyclists out for a Saturday ride. Good luck for them on the steep and winding road. More fit than I ever was. There is barely a straight stretch of road to give clear visibility. One driver made the risky manoeuvre of passing them on a corner, which put their car and ours on a collision course, so that’s a trap for the unwary.

We pass through Wye River, where a bushfire on Christmas Day 2015 destroyed 116 homes in this small town, but we don’t stop. Similarly, at Lorne, all we allow ourselves is a quick look at the main beach and a drive through this pretty seaside town. Parking spots would be in demand at the height of summer.

We pull over at the Great Ocean Road Memorial Arch and take the obligatory photo. It must be one of the most photographed spots in Australia. We are on the wrong side of the road for the official car park, so it’s not until writing this post I realise we have missed the explanatory boards and commemorative marker, but I did explain the background in yesterday’s post. This is the third arch, after the previous two were destroyed in bushfires.

Despite our time pressure, we just HAD to stop at Bells Beach, home of the Rip Curl Pro surfing championship. This is one of the many beaches at which retired surfie-Bill caught a wave or two in his young and carefree days.

Today’s swells were only moderate, but the car park was full and plenty of lycra-clad surfers were in the water, looking like so many penguins as they bobbed around. Bill took a good video, but it is too large to upload here, and I can’t figure out how to shrink it (all advice gratefully accepted).

We had planned to visit our friends on the Mornington Peninsula – that’s the land mass below Frankston on this map. We would have driven to Queenscliff and taken the vehicle ferry to Sorrento, which we have done once before. Cost approximately A$100.

We already knew they were holidaying in their caravan at Mallacoota, close to the NSW border on the east coast. Most readers will remember seeing this town on their nightly news on account of this year’s fires which broke out there on New Year’s Eve. Holidaymakers were stranded on the beach for days, and some were eventually evacuated by army personnel to the navy vessel HMAS Choules.

We decided instead to stick with the road route, as we were back on fast-moving main roads. As you can see from the top map, this takes you through the heart of Melbourne, via the Westgate Bridge – part of which collapsed in 1970 while under construction, tragically killing thirty-five workers and injuring others. 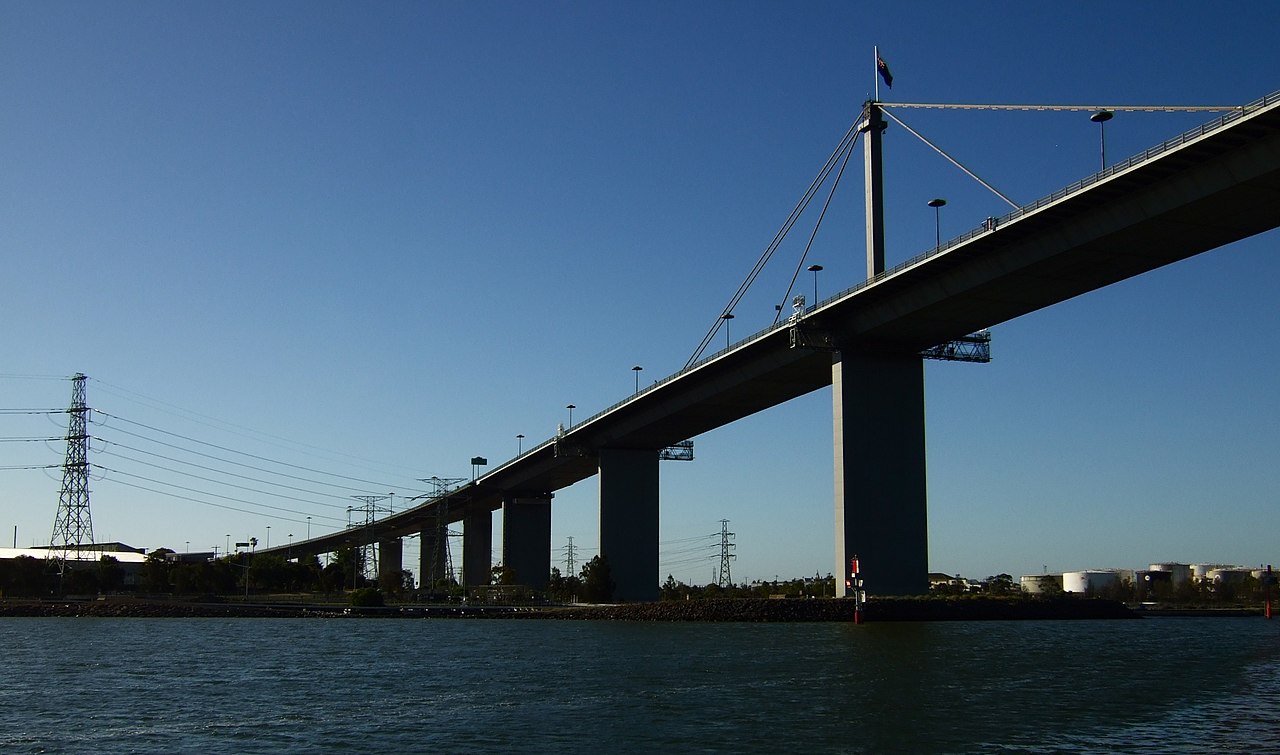 By Simon Whitehead from Australia – Westgate Bridge, CC BY 2.0, https://commons.wikimedia.org/w/index.php?curid=15130966

That tragedy was not on our minds as we took in the Port of Melbourne docklands in the distance to our left, and the skyscrapers lining the route. They seem to have multiplied even more since our last visit a few years ago. A bit of a shock after the small places we have been in the last weeks.

The route, including the freeway leading out to the eastern suburbs, is relatively easy to negotiate, as long as you keep your wits about you and take notice of the overhead destination signs so that you remain in the correct lane/s.

Had we turned left on the approach to Melbourne, we would have headed to Ballarat, and found ourselves back where we were two weeks ago. We have come around in a big loop, overland to Adelaide, and then returning via the coast.

The freeway conditions quickly leave Melbourne behind, and then we settled into driving through the rural Gippsland area of Victoria. As well as agriculture, the  Gippsland is best known for mining, power generation and tourism. We didn’t linger though, even for lunch we just grabbed something pre-packaged at a road stop, swapping drivers for the second time, so that we arrived at our destination, Lakes Entrance, comfortably in late afternoon.

Here the tourist office was open, and with their advice and maps, we chose a comfortable motel next door to a club which we thought would be a good dinner option. It turned out to be a self-select buffet though, and we were a bit hesitant. In the end, we decided pizza in our room was a good choice 🙂 We weren’t the only people thinking that way. The pizza place was busy, and rather than jostle inside, I joined a number of others waiting on the footpath for our order to be called out.

My Australian girlfriend who lives in Texas USA had called me the day before, and rang again today. They were in total lock down, she said. Even sitting on her front porch, someone had driven past and screamed at her to get back inside. (I didn’t think quickly enough to ask why this person was out in their car?). After recent foot surgery my friend was in a wheelchair and dependant on someone to bring her food and essentials. My friend is a gregarious person. She was already going stir-crazy. I figure she was calling her American friends in their day time, and then switching over to her Australian friends in the early hours of a Texas morning.

Her call prompts me to ring my friend holidaying at Mallacoota. We’d intended to “drop” in and have lunch with them on our way up the coast. We agree the time is not right. They are even wondering if the caravan park will close.

I ring my cousin who has a hideaway in the forest behind Tilba, NSW which includes a cabin, Lyrebird Lodge, which they rent to tourists. They’d been expecting our visit, and suggest Monday is the best day.

These decisions mean we can slow down again. Our next destination is Eden, only three hours up the road. That means we will have plenty of time to explore Lakes Entrance the next morning.

And just to put some sense around all that, below is another map for your guidance. You can see the challenge for those holidaymakers at Mallacoota during the bushfires. One road in, one road out – winding for 25klm (16mi) through dense, combustible Eucalyptus forest. And even if they reached the main highway there was no relief. All that area was burning. One of the reasons we came on this road trip was to stop in at all the little places en route and ‘splash some cash’. Even if only a coffee here, and a coffee there.

But COVID-19 has other ideas.