It was hard yakka (work) walking on the beach this morning. The tide was extremely low, exposing the deep shelf of the sea-bed along this stretch. On account of the sharp slope, walking on the packed sand was tough on ankles and knees; but schlepping through the deep, dry sand of the flat reminded me of every kilo I was hauling 🙂

It’s Sunday, and lots of (socially-distanced) family groups were paddling and playing. Surfers had been and gone, leaving behind a paddle-boarder who didn’t look too sure of himself. A lone beach fisherman was trying his luck. Plenty of dog walkers around, and one group of three friends had five dogs off-leash (permitted). A very wet Airedale Terrier, a Collie doing excited somersaults, a Kelpie watching its master for instructions, plus a Labrador and a British Bulldog-cross bringing up the rear. Really, the only way to ensure those two kept up would be to keep yummy-smelling treats in your pocket.

There were six cargo ships anchored out to sea, presumably awaiting a berth, but looking at the shipping movements for Port Kembla, it looks like some may be waiting a few days.  Yachts under full canvas were also out for their fortnightly social sail.

All looked pretty normal except for three strangers on the shore. I’d guess these are in the gull species – but what type? I’ve never seen this bird before, let alone on our beach. And one was trying make a make a meal of cuttlefish, something you also don’t see often here.

Hopefully one of my erudite readers can identify the bird.

The closest I can find on the internet is a juvenile European Herring Gull, but that doesn’t make any sense at all. Obviously, my subjects were a little camera shy, so my photos were taken at a distance and enlarged. 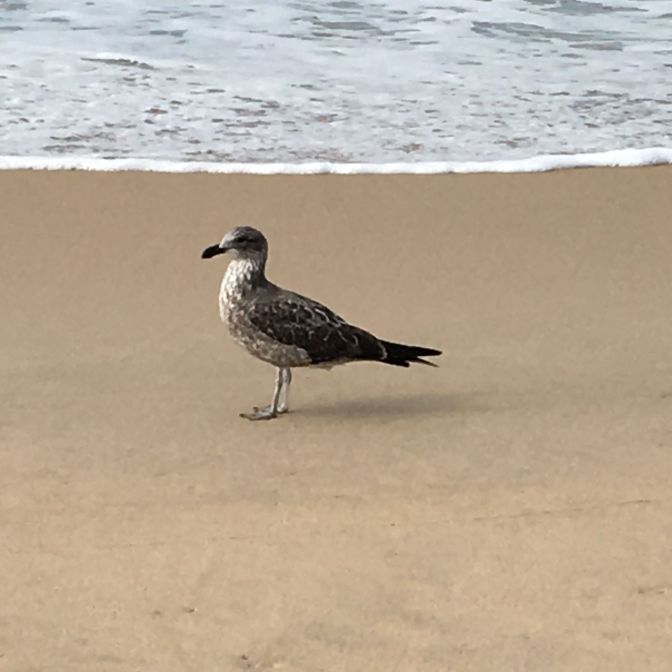 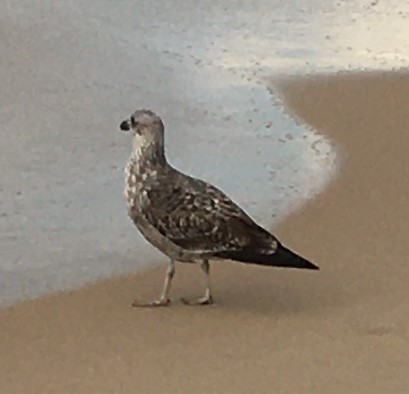 Bad weather is predicted, and there is a Sheep Grazier’s alert for “cold temperatures, rain and showers and southerly winds” tomorrow. Not that we have any sheep to protect, but being right on the beach, and in a south-facing apartment (we have three aspects) we are bound to get hammered.

Around 4pm this afternoon, an early a squall with lightning passed through, and it created another sight we never see here – a waterspout.

No chance of getting a decent picture, it just looks like a thin line on the right-hand third. But I can tell you it was an exciting and impressive sight, twirling in its vortex. Gradually it was pulled up into the cloud, breaking into sections and dissipating as it went.

Bill says the beach will be a different shape after the storm has passed. Some years ago when we had a really big one, I figured half our sand ended up in New Zealand. I hope they send it back . . .

Oh! And this is what that sky looked like about five hours earlier –