Bill and I went ‘OUT’ yesterday. In . . . the . . . car. We drove south for about half an hour. Remaining in the car, we looked out over a couple of his old surfing haunts. Still in the car, we drove around a new housing development which will include a marina.

And then we parked, and we went to . . . the supermarket. Bill only takes me on the best outings 🙂

This was one of the big two which dominate Australia’s grocery trade. It was new, clean, spacious, with wide aisles and not many customers. We usually shop at Aldi, which has the oddest things for sale – lawnmower, anyone? – but in terms of groceries, it sticks pretty much to the basics, which is all we need. Our local Aldi has four aisles. This store had about thirty.

In the vegetable section, I found bags of zucchini labelled “odd bods”. They were half the price of the other zucchini. Just as fresh, just as flavoursome (which some may say is not at all), but not as pretty. Why does a zucchini have to be uniform in appearance? It’s not as if you serve it on a plate whole. You slice, dice, grate – whatever. So how is it we let so much go to landfill just on its looks?

Anyway, I brought my poor little orphaned rejects home. Fried off some onion, garlic and a dash of green curry paste, put the chopped zucchini in the stockpot with chicken stock and a dash of white wine, and let the lot plop away until it was time to get the blender stick in there. Finished off with a touch of salt, pepper and a little cream, and here goes another tasty lunch. Enough left over for tomorrow’s lunch. And it all worked out around A$1 a serve. 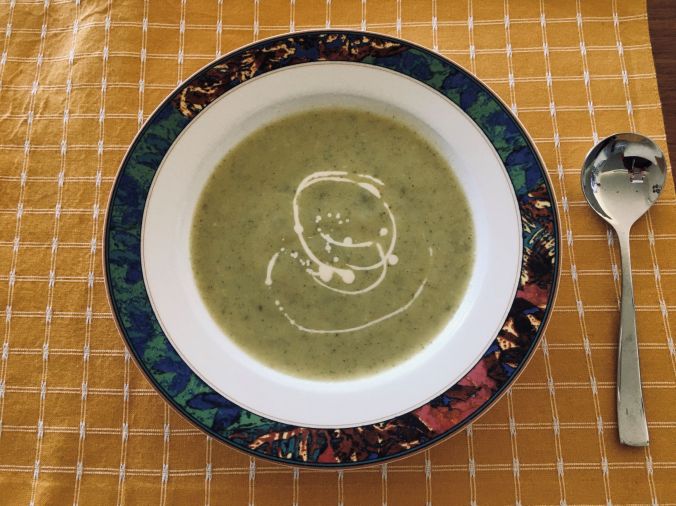 27 thoughts on “OUT – Our Uneventful Tour”