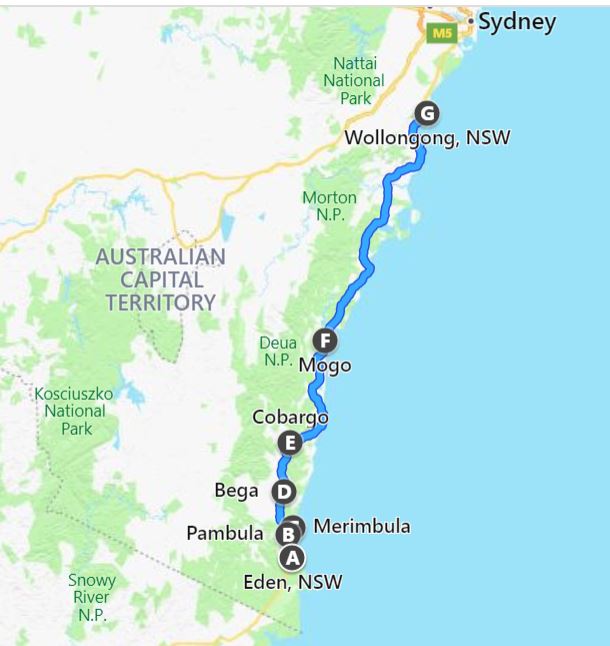 We are now on the “Sapphire Coast” of New South Wales, which includes the towns of Eden, Pambula, Merimbula, Bega, Tathra, Cobargo and Bermagui. Tathra and Bermagui do not feature on my above map as you need to turn off the main highway and head out to the coast, on a “one way in, one way out” road. Instead, we headed straight north for the 400klm drive to home. It was pretty easy actually, each of us driving 100 on, 100 off, two times around, and next thing we were pulling in to our garage.

But not before we did some final exploring. Eden is set in Twofold Bay – such a deep harbour that cruise ships dock here. It was once at the forefront of whaling, now it is nick-named the Humpback Highway, as it is a popular spot to watch whales migrate. The best opportunities are our Spring: September – November when they head south; in the winter mating and calving season they tend to stay further out to sea.

Sapphire Blue waters of Twofold Bay, Eden, New South Wales. Woodchip mill and vessel in far distance on other side of the bay.

Eden is also is a working commercial fishing port, so we walked down reasonably early, to the part of the bay called Snug Cove, to see if we could catch the boats return. They were earlier than us, but we did see some movement of crates headed to market in Sydney.  As well as fishing and tourist craft, there was plenty more to see around the marina; the police boat, pilot boat, tugboats – can you spot the water cannon one one of them? – the mussel-selling barge, and others. And where there’s a port, there’s a pelican. I’m on a bit of a roll with them at the moment.

A short drive leads up to Lookout Point which gives wide views of Twofold Bay and its sapphire-blue waters. That’s where the top photograph was taken from. This is a good place for whale-spotting from the shore. As mentioned in yesterday’s post, there is also a major woodchip mill on the other side of the bay. We could see haze rising in the distance, and wondered if it could still be residual smoke from the January bushfires that did so much damage to their operations. Surely not. 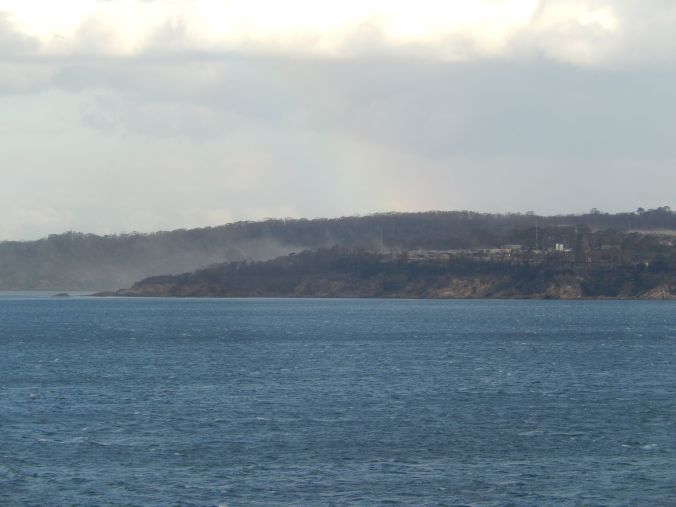 Given last night’s announcement about COVID-19 precautions, we weren’t sure the Eden Killer Whale Museum   would be open, but the volunteers there said they had not yet received any instruction to the contrary, so in we went for a couple of hours before leaving Eden. We started by viewing a short film before wandering the galleries.

The main focus of this museum is the amazing relationship between a pod of killer whales (Orcas) and whalers, in hunting baleen whales (eg. humpbacks and southern rights). In essence, the lead Orca would alert the whalers, often in the early hours of the morning,  by slapping its tail on the bay’s surface, leaping about, and generally creating a disturbance, and then lead them to the whales, which might be several bays away, herded there by the rest of the pod. When the whalers had done what whalers do, the Orcas would get to eat the lips and tongue of the beast before the whalers brought the rest to shore. This is better explained in the explanatory board, in case of interest. 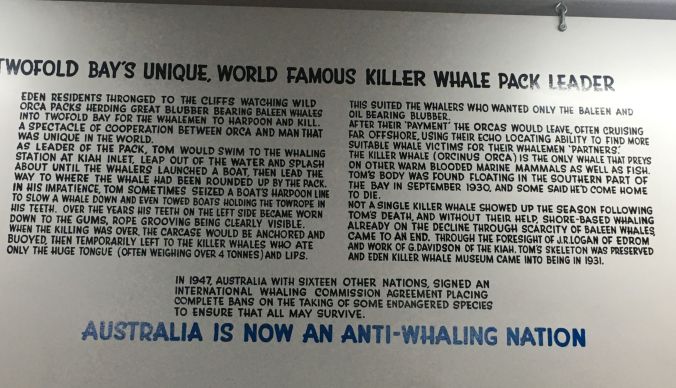 It all sounds rather gruesome and distasteful to our modern thinking, but there is a handy reminder on the display boards of all the products that were made from whale before plastics took over the world.

The Eden whalers knew every member of their Orca pod by name — identifiable by each unique dorsal fin.

The skeleton of the most famous, Old Tom, as written of in the above placard, is preserved in this museum. 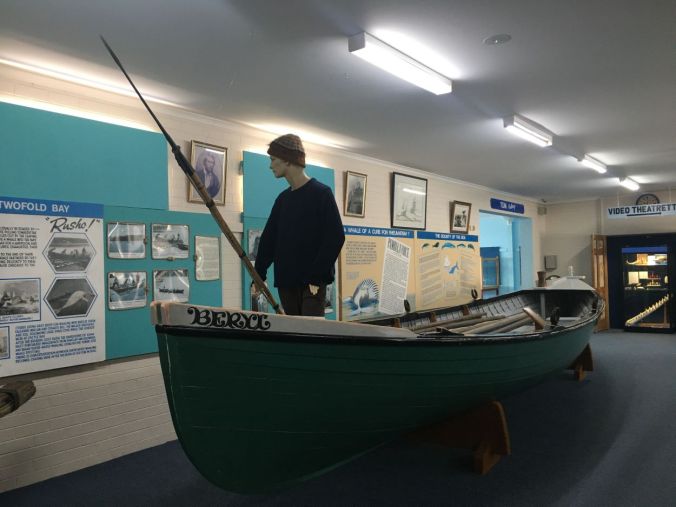 I was rather taken with this shopping list reminder for a lifeboat. I’ve used this type of memory jogger in written exams, but would never have thought to apply it this way. “Pa Saw Some Bread Milk and Water Become Pork Balls“, reminds you to stow:

And you have to fit all that in here: 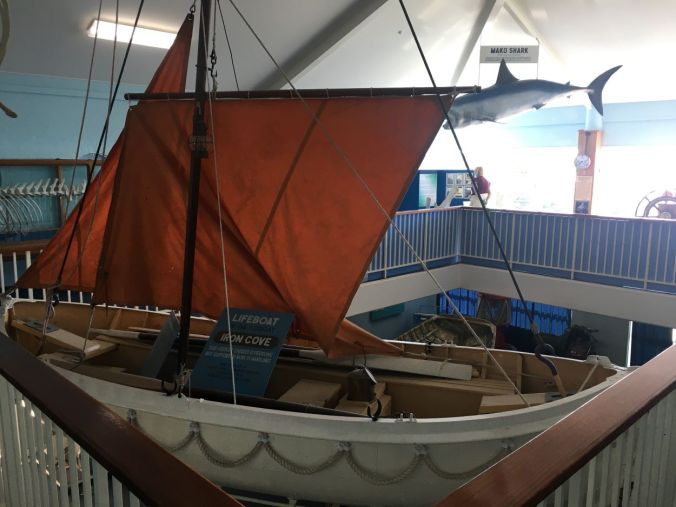 After leaving Eden, with such a drive ahead of us, we didn’t linger at other stops along the coast, until we reached Cobargo. Bushfires raged up and down the coast, but this town is likely to have made it to international news, as its main street was ravaged, and sadly, a father and son lost their lives while trying to defend their home about 10klm (6 mi) away. Perhaps you can understand from this photo how random and fearful a fire can be. The properties opposite each other have been destroyed, while those adjoining either side remain intact.

This pretty corner house, a short walk further down the street, looks unscathed, and yet the trees are burnt right down to their backyard.

The trees on the skyline are naked sticks.

And the resident “little people” have erected a sign, “Thank you Firies. You saved our home.”

It was the same situation further up the road at Mogo, the fire had come right through town. We drove the few minutes out to Mogo Wildlife Park. After the fire broke out on New Year’s Eve, the staff battled blazes on all sides for hours; and for the next five days struggled to keep on top of spot fires and keep the animals safe. This photo, taken somewhere near the entrance gate, shows that all these trees burnt, and now upliftingly, are doing their best to regenerate.

We had an unexpected surprise on this last day of our trip, so I will wrap-up with this final story.

(Is that an oxymoron? Isn’t a surprise supposed to be unexpected?)

The Eden Killer Whale museum includes a gallery of paintings, and slap bang in front of us was this one.

Whoaaaaa! Tucantu is the former home of my dear friend and neighbour who regularly comments on my blog. She has kindly supplied these details.

She and her husband left Falmouth UK in August 1980 in Tucantu for a ‘sail westwards’ and ended up in Wollongong (Australia) fourteen months later – because his twin sister lived here.

They stayed for six months and then set off back to the UK – just the two of them and a cat. The circumnavigation took three years. Then they lived aboard for another year, working in the Chandlery on Falmouth Marina, all the while making plans to get Permanent Residency in Oz (Australia) because they wanted to sail back and set up a new life in a place that they loved.

The return journey took fourteen months, and they arrived back in Australia in 1985 on one of the biggest days in our calendar –  Melbourne Cup!

After going on to establish a successful architectural practice, they retired around the end of last century ( 🙂   – that’s my words 🙂 – ) and did some more sailing before downsizing and moving into our complex over ten years ago.

Such wonderful times came to their close in July 2010 when they sold Tucantu to a local man, and it is now owned by a chap in Goulburn NSW. Tucantu has moved on to other owners, but my friends still have their wonderful memories of such a unique home!

Just a few photos from their archives. 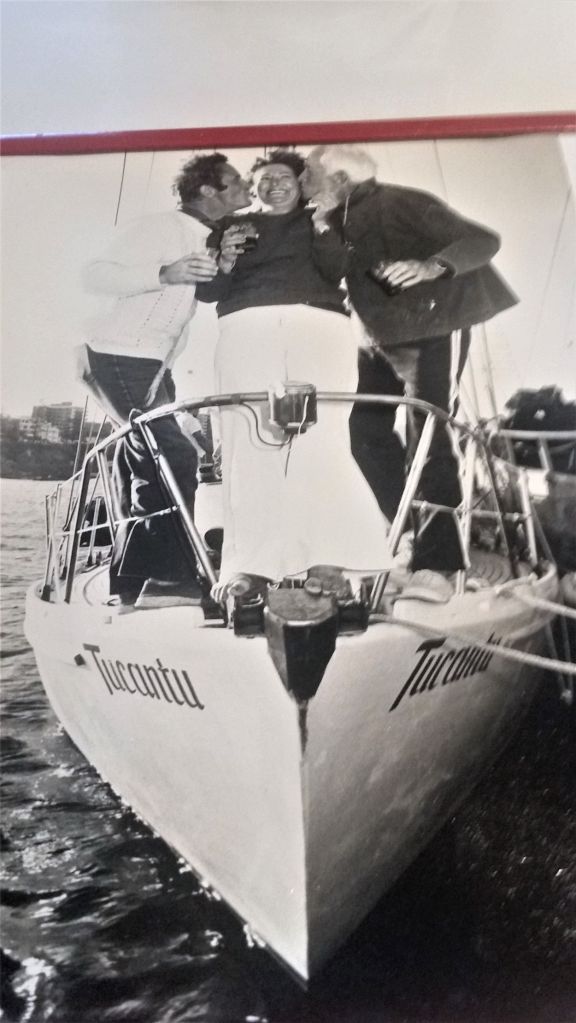 In Pittwater, North Sydney, home for six weeks each year around Easter time.