After our five nights on the Gold Coast of Queensland we headed inland to Toowoomba. We could have taken the motorways and been there within two and half hours, however we opted for The Scenic Rim Way. This is an area of densely forested ranges which form part of the Great Dividing Range, which stretches more than 3,500 kilometres (about 2200 miles) from the northeastern tip of Queensland, down the entire length of the eastern coastline through New South Wales, then into Victoria, where it turns west and finally peters out into the central plain at the Grampians in western Victoria. Generally, the range area we travelled on this day is known as the Gold Coast hinterland: the “green” behind the “gold” of the coastal beaches. You can spend a day, a week, or more, in these “mountains” (the highest is Springbrook Mountain at 900 metres / 3,000 ft). You can camp, bushwalk, hang glide, hot air balloon, go to a glow worm cave, visit wineries, art galleries, craft shops, and so on. For us, it was a scenic long day drive.

As you drive up into the area you can stop and look back down on to the coastal strip that is the Gold Coast, and pretty quickly you are into the rainforests of the various national parks. On the route we took, there are numerous settlements with the word “Tamborine” in them, as we had reached the Tamborine Mountain plateau, which has a current population of around 7,000 tucked away.  Our first stop was for refreshments and brochures, but there is plenty to do. If interested, you can find more here.

Our first little bushwalk was easy! The return Curtis Falls track, in  Tamborine National Park, starts practically in the middle of town, and follows Cedar Creek. 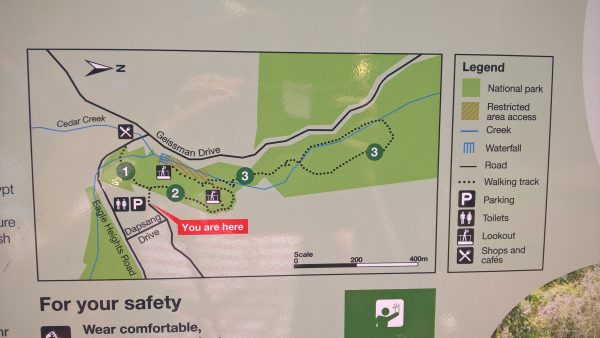 A walk through eucalypt forest with towering gums overhead takes one into rainforest until you reach the falls. On the way, you might see turtles on logs, and fish and eels in the rock pool.  Access to the rock pool is not permitted, as it is glow-worm and platypus habitat.

So what did we discover when we got there? A bunch of (English speaking) European backpackers who had ignored all the signs and were swimming in the rock pool. Luckily for my sense of outrage a ranger was quickly on the scene and sent them packing. They were lucky, he was empowered to fine them on the spot. But monetary recompense is hardly the point.

Not a huge amount of water at the moment, as the east coast is exceedingly dry. Nevertheless a tranquil, fairy glen. 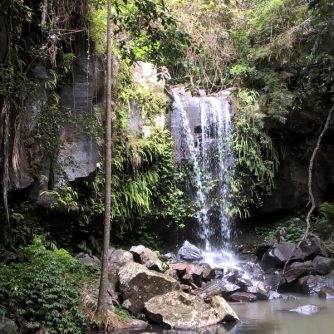 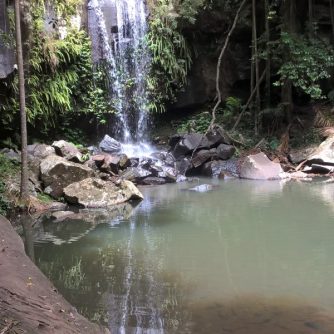 On this walk you will also see plenty of strangler vines. 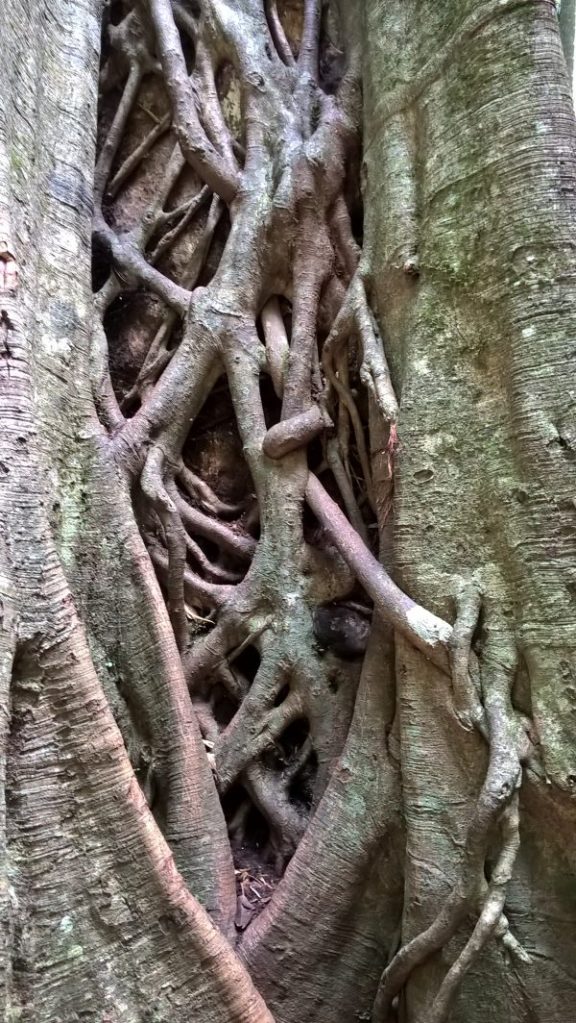 Somewhere further along on the drive, we stopped for another bushwalk (click to access the individual photos). 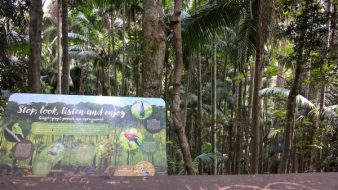 By which time, we were way overdue for lunch. This bushwalk was in an isolated area, at the end of a road, and as we drove back down, we came across a rather upmarket restaurant, set in open ground, that is also a reception function centre. I can’t remember the name, but it was in a Queenslander style timber home, so like this picture that it may almost (probably) be the same place.  As it was still breathtakingly hot, and we were both a little dehydrated, it was very pleasant to sit on the outside balcony and eat a light lunch.

Our route took us on to the tiny rural township of Canungra, which is in the foothills of the Lamington National Park. Canungra “owes its existence to the early cedar getters and sawmillers in the early part of the 20th century,” which is curious, as right this moment I am reading The Cedar Cutter, by Tea Cooper. (Don’t get me started on the heartbreak of so many beautiful trees having been cut down by those early European settlers).

This area is synonymous with the O’Reilly family, who have owned guesthouse/s in this area for a long time.  In 1937 an Airlines of Australia Stinson plane, in heavy rain, disappeared on a flight from Brisbane to Sydney, with two pilots and five passengers on board.  People in this area had heard some aircraft noise. On hearing about the disappearance later, Bernard O’Reilly of the Lamington Guest House theorised about the plane’s path and height, and hiked into the mountains nine days after the disappeance.  After an overnight camp, he found two survivors. There had been a third, who met with an accident while going in search of help. Apparently the survivors’ first thought was to know the cricket score. Quite a legend.

And so on we drove, really only scooping up the north-east corner of these various ranges, until we popped back up to the highway outside of Ipswich – the home of one of the school friends I had just met at the reunion (but we didn’t visit). Had we gone directly from the Gold Coast, we would have been there in ninety minutes, but by now it was late afternoon.

Heading west, reaching a place called Gatton, not so far from Toowoomba, we turned off to the industrial area for old time’s sake. There is a large transport company, Nolans Transport, who cart import and export cargo a 1000klm (620 mi) to Sydney; and with whom Bill did business for many years in his role as a head clerk on the waterfront.  So to top off our day in the rainforest, we took a look at a trucking yard and their various-sized fleet of trucks . . . ‘cos that’s the kind of people we are. We can’t get logistics out of our blood 🙂

Into Toowoomba just before the tourist office closed; and a plan set for the next day. Then off to a place called The Spotted Cow for upmarket pub grub, and finally, a well-earned motel sleep.

FOOTNOTE: In early September of this year (2019) various bushfires broke out in the Gold Coast hinterland, including in the Lamington National Park.  An ominous warning for this year’s season, given that rainforests tend towards being fire retardant. You can read more here about the extent of the fire damage.

While Canungra was a major marshalling point, one of the losses was Binna Burra Lodge, set high in the ranges similar to O’Reilly’s. You can read more about that here. The Scenic Rim tourist authority, however, is at pains to broadcast that the area is open for business. Many of the locals rely on tourism for their livelihood.

30 thoughts on “Gold Coast to Toowoomba via The Scenic Rim Way, Queensland”