When reading this post, please take into account that I actually started writing it an entire month ago. Life, somehow, keeps overtaking my best intentions.

When Bill and I moved to our current abode – an apartment in an over-55s complex, on a golf course, beside the beach – I used to tell everyone . . .

Which part of this move was all about my needs?”

We are now in our eleventh year in the complex. Every year that passes means our revised lifestyle makes more sense to me. However! I still have enough energy to fight for my rights, and one of those is; that it is the operator’s responsibility to keep our apartment in tip-top condition . . . which means that we have been “evicted” for two weeks while they repaint and re-carpet.

I left Bill to find us alternative accommodation. With all due credit to him, he settled on a small cottage only 90 minutes down the road. The property is on twenty acres, rural, yet close to the coast, nestled in an inlet nearby the Jervis Bay area. 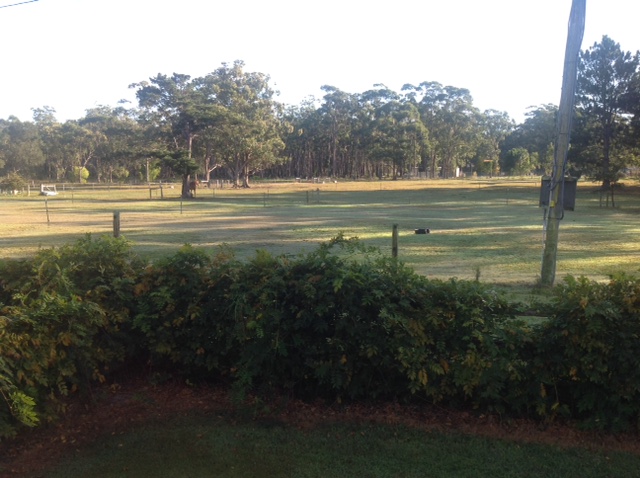 It’s autumn in our part of the world, yet the days have been spectacularly warm for this time of the year. As we sat on the back deck, in the late afternoon of our arrival, sharing a bottle of wine; Bill – seeing my delight at the still, calm conditions, surrounded by green pastures, eucalyptus forest, kangaroos, birdlife, and a few horses – turned to me and said,

“This is payback. Eleven nights of what you love, in return for the eleven years of what I wanted”. 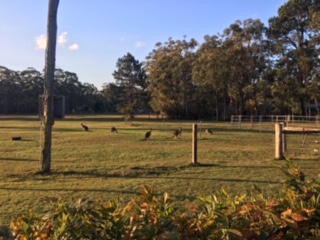 Early morning and late afternoon the kangaroos arrive. That’s the smudgy dots in the above photograph. I think they are all females and young ones. There doesn’t appear to be a “big buck” among them. The mumma kangaroos can look as if they have a bad case of muffin top. Actually, it’s a young joey in the pouch, even though they have a juvenile who no longer lives in the pouch following their every move. It’s this prolific breeding that makes kangaroos such a pest to farmers.

(For the benefit of my overseas followers) – Baby kangaroos are born very immature. I was still in primary school when we were required to watch a film on the birth of the red kangaroo. The little baby is born from the same place as we are, or thereabouts,  🙂 and then, blind and tail-less, looking much like an overgrown garden slug, it has to find the snare trail formed by the conjunction of hair growing on mumma’s tummy from opposing directions, grasp on, crawl up and into the pouch, find a teat, and then latch on tight for several months while it grows into something recognisable.

The joeys in the pouches of the kangaroos on this property are much further along in their development. Every so often a head pops out, or more likely, it does a tumble turn and the legs stick out the pouch, while it’s head down suckling on the teat. You can see a joey’s head peeking out of the pouch in this blurry enlarged photo . . .

One of them is developed enough to jump out for a short time. Watching it the other day, I was reminded of our children. Remember when they were small, and ran in and out of the house all day? Until, in frustration, you said to them –

“Stay in or stay out – but for goodness sake, make your mind up!”

The three horses are interesting. The owner says they are “herded”. One of them was taken away for a few hours yesterday. The other one was terribly restless, stamping its feet and whinnying all day. I started to worry it had colic. Apparently, our ongoing drought has seen off several horses, their intestines ravaged by dry feed; but in this case, it was a simple case of missing its friend. The way it stood to attention when it heard the horse float coming down the dirt roadway reminded me of the loyalty of my childhood dog. And, just like my dog, as soon as it knew it was its mate coming home, it raced down to the gate to meet it. There are horses somewhere in these shots  . . .

Friends from home, on the few occasions they’ve needed to text me, apologise for interrupting my peace. “What peace?” I answer. The birds here never shut up.  There is something blooming in one of the eucalyptus, the blossom  looks similar to the picture below, and the birds are going berserk.

I can identify some of the birds; rainbow lorikeets, rosellas, the occasional kookaburra, a wattle bird with its distinctive ka-chuk call, maybe another type of honey-eater, perhaps a native mynah. The rest I have no idea. They are so fast I can’t even study them, except for a magpie-lark (Peewee) that seems to think I belong to it. It nearly deafened me yesterday, while it sat on the table as I typed.

A noise that always confuses me is the call of the black cockatoo. They sound as if their throat is being cut. Why any bird would want to announce its presence so stridently is beyond me. We have three at home who visit intermittently, but are always in flight. On a walk in this area, I came across another three, these ones busy in a tree. The three locals are white-tailed black cockatoos.

My attention was first grabbed on account of the “bits” that were falling from the tree. I realised these birds, with their tremendously strong beaks, were stripping the covering from a rough-barked eucalyptus and getting into something underneath. I saw a shadow wriggling in the beak of one. I can only imagine there are grubs underneath the bark.

While white cockatoos, of various species, are prolific in Australia, it’s quite a privilege to see a black one. The below photo is actually a yellow-tailed. Not that you can detect the difference in this shot. They need to fan their tail for the average bird-watcher to know the difference, and I’m happy to say all three of mine the other day did so. I went back to the same place a few days later and they were no longer there. 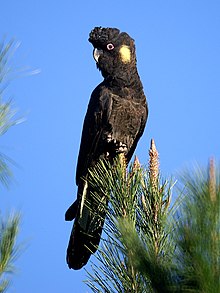 The real reason Bill chose this accommodation above all others is that he thought it would be a fabulous writers’ retreat. And he was right. Every day I have some output, some days more than others. Let’s hope I have an entire manuscript at the end of eleven nights. After all, it took me nearly eleven years to write the first book 🙂

Footnote: Two-thirds of a manuscript was completed in this eleven night retreat. I’ve lost count of which draft version this is – perhaps it’s the fifth. Since returning home some four weeks ago, not another word has been written. But! I live in hope. 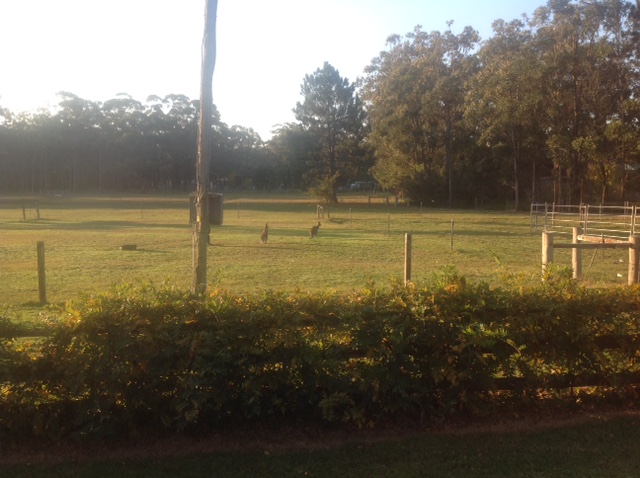