I haven’t posted a blog in a long, long while. I have, to use the Australian vernacular, “been flat out like a lizard drinking“. 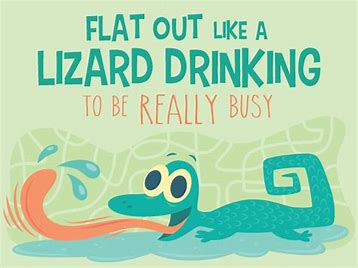 December flashed by in a round of parties and get-togethers. As a retiree with theoretically more free time on my hands, they seemed even more frequent and frenetic than when I had a corporate job. The phrase “the end is nigh” entered my head more than once. Why else were we all behaving as if there would be no tomorrow? There were times I doubted my stamina to get through the month.

I stumbled into New Years Day and the annual march of the grandchildren. This time the eldest grandchild returned, #2 was away, #s 3 & 4 came as usual – just a few years older and wiser than when I wrote that previous post. A parent came too, plus he brought a new partner. It’s chaos when a limited-space apartment housing two settled adults swells to seven hyped-up big people, but I wouldn’t miss it for the world. It’s great fun, plus, when they leave, I feel motivated to do a thorough spring clean.

After many days of scrubbing, January continued on as de-cluttering month. My octogenarian step-mother announced that she would like to put her house on the market. My husband and I went to live with her for a week while we dealt with the accumulation of twenty-five years and the mayhem of rooms being re-purposed from their intended design. Then my two half-sisters came in to do the final styling. With our combined efforts, not the least of which was my step-mother being prepared to part with certain things, we finally announced “Job Done“.

Much of the excess had to be sold, and it seems that the current trend is Facebook buy/sell/swap pages for your local area. Armed with this new knowledge, I returned home determined to clean out our garage and raise some pocket money at the same time.  Say good-bye to another week for that exercise. I’ve had some sales success, but there are still bits and pieces available. For example, collectors plates have had their day and are no longer in demand, even if they are Royal Doulton 🙂 And remember that phase of hand-painting ceramic plates? I had two sweet ones signed by a hobby artist who I quickly discovered had died some years ago. Through Ancestry.com I was able to track down her daughter, and am happy to report they are now in her possession. A small unexpected keepsake of her mother.

Then a good friend came to visit us for four days. We had a lot of fun going through some items that I had inherited late last year. This comprised around 100 die-cast model cars and about thirty replica watches. Enter yet another sales project. I’d love to keep the “toy” cars, but I just don’t have the space. Sigh.

More visits, more projects, then bingo! It was the end of February and time for me to hit the road. My old high school year had organised a three-day reunion. Yikes! Thirty or more people, most of whom had not seen each other for forty-seven years. The reunion ran from 1st-4th March and I was taking two days to drive to it. Not to mention the time required for hair and beauty appointments in the lead up. Oh come on! Don’t laugh! You don’t think I would venture into such a challenge without putting my best foot forward do you? (It’s not as if I was the only woman who needed her eyebrows tinted – in fact, this phenomenon of disappearing eyebrows as we age was quite the discussion point among us women! Who’d a thunk it!).

I drove there in Tamara Grace, aka Tammy. Tammy is a 2011 BMW convertible 120i which I inherited along with the toy cars. If any of you have noticed from changed profile pictures that I have been growing my hair, Tammy is the reason. I wasn’t quite sure what to name her. Isadora with her flowing scarf ended her life suddenly, Thelma and Louise drove over a canyon, and even Grace Kelly mis-timed the Monaco curves. Then a neighbour drew my attention to the Art Deco artist, Tamara Lempicke, and her self-portrait in a Bugatti (see below).

I was very drawn to the spirit displayed in this image, yet my convertible is white and classy, much like Grace Kelly herself. So, undecided which way to jump, the obvious solution presented itself. Give her both names. Hopefully I will have a photo of me in Tamara Grace in the next post.

The reunion was in a rainforest country town called Bellingen, which I have written about before. It’s about 650 klm (400 mi) from home, and I used this trip as an excuse to divert to visit another friend for an overnight stop.

Rather than turn around and head back home in the same direction, we’ve used that initial mileage as an excuse to do another road trip. At the end of the reunion Bill flew up (using all my frequent flyer points which were short by $1.70 – I kid you not, 🙂 ) and we have been on the road now for almost a week.

If I wasn’t so darned exhausted by the reunion, I would have been posting a daily journal of our travels.  I am taking happy snaps on my mobile phone, with every intention of writing a story about them. So watch this space, there is always hope for the future.

Signing off now from Burleigh Waters on the Gold Coast of Queensland. GG 9th March 2019

30 thoughts on “Getting Back in the Saddle”