My go-to place when researching is the newspapers of the day, and the Australian National Library makes this easy. They digitise an ever-increasing number of Australian newspapers, plus many other resources such as images. The service is free, no subscription is required, and the search engine is easy to use. https://trove.nla.gov.au/

Norman Carter trained in Melbourne then moved to Sydney in 1903 with his friend Hugh McCrae. In that year they created a picture book “The Australian alphabet“. Carter did the drawings, and McCrae the “jingle”.  Other newspaper illustrations followed in 1904.

By 1905 he was making a small dint in the art scene. “One of the most promising of Mr. Bernard Hall’s students two or three years ago, (Norman Carter) is making great headway here,  wrote “Q” in his column “Stray Shots from Sydney” (Punch, 17 Aug 1905, p22).
During these years he also exhibited at the Royal Art Society, using The Cellist , the painting he had done of his brother, Bryce. It’s often mentioned that the Carters were a musical and artistic family.
In 1906 he was commissioned to do a portrait of the retiring Lord Mayor, Alderman Allen Taylor. (SMH 15 Dec 1906 p.13). He also submitted a work called “Portrait Group” to the Royal Art Society exhibition which received some qualified praise, or what we might term today, “constructive criticism”.
He finished the Lord Mayor’s portrait by the middle of 1907, plus another of Governor Bligh (he of Mutiny on the Bounty fame) and continued newspaper illustrations. Those were not his only works for the year. His submissions for the annual exhibition included a portrait of a girl “putting a tea-scented rose upon her breast“.  (Evening News 24 Aug 1907 p8). This time the reporter is much more enthusiastic in his praise.
On 14th January 1908, Norman Carter advertised that he would open classes for drawing and painting at a new studio in Norwich Chambers on the corner Hunter and Bligh Streets Sydney. Pupils intending to participate in his “Life Classes three nights a week” had first to make an interview appointment. (SMH 4 Jan 1908 p2).
In the Freeman’s Journal of 13 Feb 1908, page 27, we learn that the above-mentioned  painting of a young girl is of Miss Boyle, daughter of the Catholic music conductor (was there only one, I ask myself?) and that Norman Carter is now “moving to the front rank by the application of undoubted talent in a hard and assiduous devotion to his art”.  A representative of the paper had “a recent opportunity of witnessing the class at work on a living model.” This article consumes a 1/4 page and includes a contemporaneous photo of Norman Carter.
In every month of 1908 there are several articles about Norman Carter; and the various illustrations, drawings and portraits he is turning out, and in each of these articles the sitter or subject is identified. A number of the illustrations are for the Sydney Mail, the same newspaper for which the beau of Lucy’s elder sister occasionally wrote articles.
Digressing for a moment . . . One of the illustrations for the Sydney Mail was a coloured souvenir presentation picture, ready for framing, of the visit to Sydney of the United States (US) Navy’s ‘Great White Fleet‘. Sydney went wild for the Americans. The 1902 Anglo-Japanese Alliance had been renewed in 1905 and Australia was getting a little nervous that the British Navy might be turning its back on protecting little old us all the way down south.
There is no mention in the newspaper articles of what is being produced in the studio “life classes” but suddenly – at the annual show of the Royal Art Society held in August – as well as all the other identifiable portraits Carter exhibits . . . this previously unmentioned portrait pops up all over the place:

Of the twelve works Norman Carter exhibited in that show, the only one to be purchased by the art gallery was “Study in Brown”. Lucy, at the time, was a twelve-year-old schoolgirl, and yes, I’ll grant, – impoverished, illegitimate Lucy probably wasn’t a “particularly interesting subject” in comparison to all the other “eminent” sitters who Norman Carter had already painted, and those he would go on to paint in years to come (including Sir P. G. Taylor, who I already wrote about in a completely unrelated post)

In her article “Artist on Canvas and Glass: the Stained Glass Work of Norman Carter”, Karla Whitmore says “In the early phase of his career Carter was influenced by the ‘low toned’ movement espoused by Max Meldrum, who also studied at the National Art School in Melbourne.”

Instinct, combined with the reasoning built up from our previous diggings, tells me that Lucy was a paid sitter for the life art classes, and that Norman Carter, mimicking the way he had been taught, set his students a lesson to paint in brown tones. No doubt he would have painted along with his students.

The result, in my mind, was that this ‘Study in Brown‘; a depiction of an ordinary, un-named, twelve-year-old schoolgirl, a portrait owned by the NSW Art Gallery, closely fitting the description given by my aunt and JA’s grandmother, was in fact, Lucy Elizabeth Creft, born on the 15th September 1895.

A hunch, however, would not cut it as irrefutable proof if we were claim that to the NSW Art Gallery.

So where else could we turn for proof?

On the subject of “eminent” sitters, there is also mention of a drawing of Professor David who was away with Ernest Shackleton on his Nimrod Expedition to Antarctica. The article had the good grace to mention the lot of the wife left behind while her husband went off adventuring. This drawing, signed by Carter and dated 1911, is held by the New England Regional Art Museum. If the date is correct then it was done after his return. I wonder what became of the 1907 one mentioned in the newspaper article? 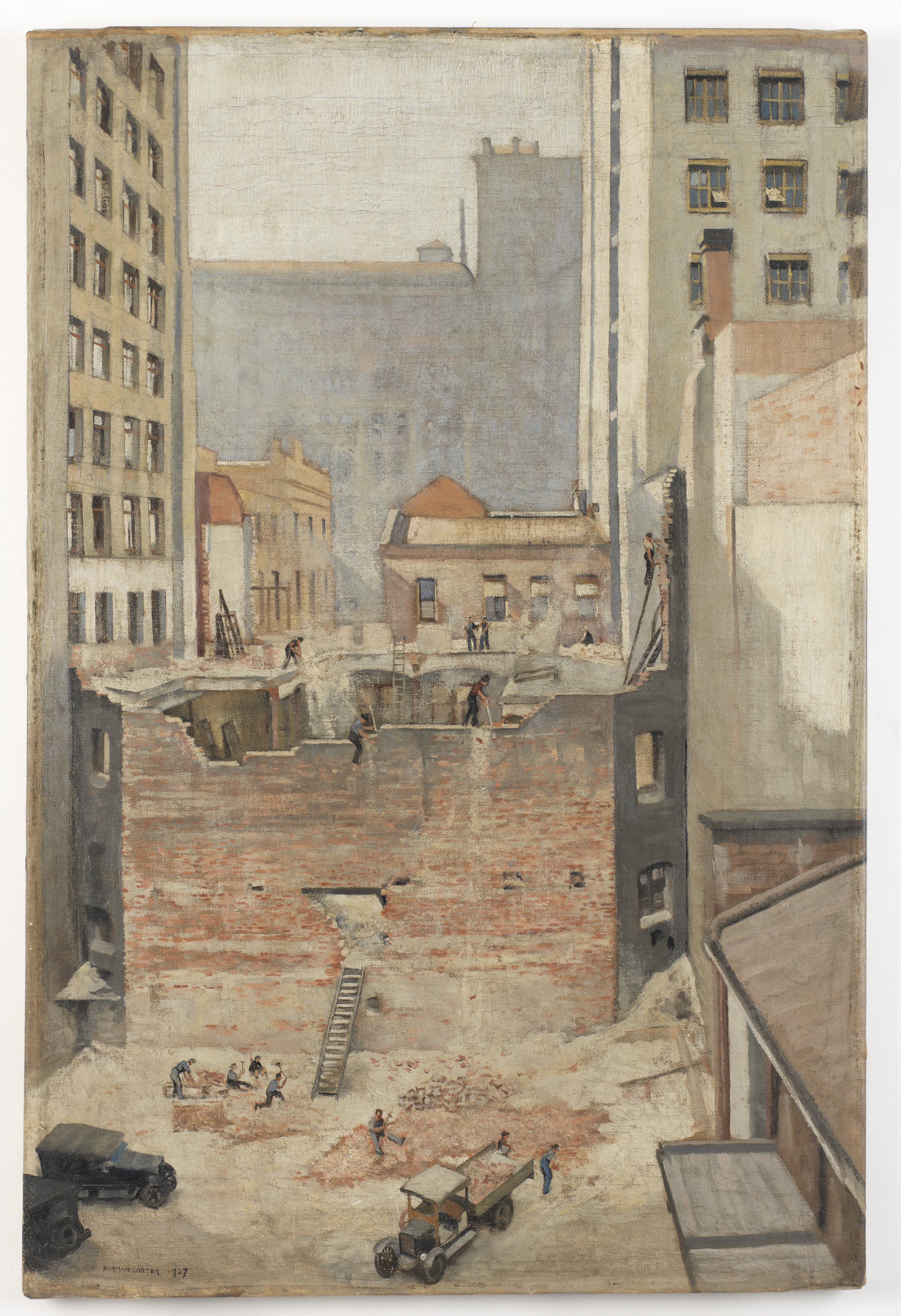 Demolition 76 Pitt Street 1927
BY NORMAN CARTER
Sydney in the 1900s was being transformed and modernised by removing many colonial buildings. Wide-scale demolition soon reshaped the city’s character and skyline.
In 1927, Vickery’s Chambers, at 76 Pitt St, fell to the path of progress. This building had special significance for Norman Carter, who lectured in art at the Sydney Technical College, and for Sydney University’s architecture department through to the 1940s. Carter had previously rented a studio in Vickery’s Chambers, and taught life classes there for the NSW Royal Art Society. Carter was also Vice President of the Society of Artists which had its meeting rooms there . . .Source: Mitchell Library, State Library of New South Wales

26 thoughts on “A Study in Brown – Part Five – What do the Newspapers have to say?”