Norman St. Clair Carter was born in Melbourne, Victoria, in 1875. He studied at the Melbourne National Gallery School and under Phillips Fox and was apprenticed to a stained-glass maker. For 28 years from 1903 he lectured in architecture and history of art at Sydney University, N.S.W. His ‘Low-toned Harmony’ won a bronze medal at the Paris Salon in 1913. He became well-known for portrait-painting, design of stained-glass, was a pioneer of mural painting in N.S.W. and a foundation member of the Australian Academy of Art. He died in Sydney in 1963.

Fortified with coffee and lunch, JA and I arrived at the State Library of NSW and were directed to the Special Collections area where we submitted our request for the box they held on Norman Carter (call number ML MSS. 471).

After a short wait, we received microfilms and a hard copy diary. I tackled the microfilm, JA the diary.

One of the microfilms contains notes Norman Carter prepared for an autobiography. Bingo! . . . or so I thought. Like many before him, he started out hand-writing, had some pages typed up, and then went over and over perfecting what he had written, focusing on certain times and events that were top of mind, never reaching the end, never completing the story, and omitting large slabs along the way. There was nothing written for our years of interest, which was very early in his career.

Other records include lectures, speeches and various miscellaneous textual items. Among other achievements, he became  Senior Vice President of the Society of Artists. He was also a prolific stained glass window artist. If you were intending to write a biography of Norman Carter there is plenty of material there, including a window into his hopes, ambitions, frustrations and feelings on a range of subjects about his art, art societies, teaching and educational institutions.

But nowhere did he say,

“I’m doing a painting called Study in Brown and Lucy Creft is the sitter.” 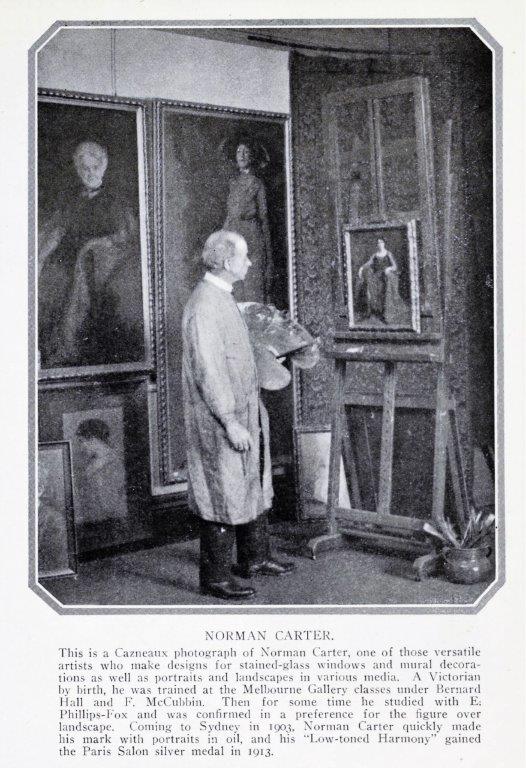 Over to JA, who was painstakingly turning each page of the diaries and deciphering the hand-writing.  This diary entry captured our attention, not because it was talking about Study in Brown, but the word “orphanage” leapt off the page at us.

“Went to the orphanage Thursday evening to say good-bye to Mr Enes?  (ink blot) who is sailing to England on 17th. Had a grand yarn with Emily. She has promised faithfully to sit for me. At which I am highly delighted and will endeavour to make myself competent for so delightful a task. What a lovely study she will make. Dark hair, rich complexion, (. . . ?) to most delicate cool whites at neck, blue eyes and a most exquisite form of face, uncommon. How shall I be able to do her justice. Something to work for though.”

At this point in the diary Carter is still in Victoria, a novice, and a couple of months away from beginning his studies under Phillips Fox. Albert Enes, it transpires, was a fellow student. (Carter painted his portrait in 1940.)

Who was Emily? A “resident” in an orphanage, or a relation to Mr Enes? We still don’t know, but here we had evidence of a fascination with capturing the image of a young girl, and that at this stage of his career, he wasn’t dealing with the “establishment” (as is common in his later portraits).

Move forward to 1903, and Carter relocates to Sydney. At the beginning of 1908 he set up a painting studio and began to take in students. Is it possible that Study in Brown was the product of these lessons? And that Carter, building on his earlier fascination with capturing the image of a young girl, and still in such an early stage of his career, hired Lucy as his sitter? No doubt she came cheap.

Lucy came from a poor family. There is no father on her (1895) birth certificate, but I have established he was John Creft, who died in 1907, seemingly by that time estranged from the family, as it is a stranger – perhaps a landlady – who provides the death certificate details. Creft was given a cut-price funeral and is buried in a common (pauper’s) grave. Lucy, her older sister, and her mother were in very straightened circumstances. Modelling for painters would have been one way for a schoolgirl to earn money.

Also in the back of our minds was that JA’s grandmother, while not remembering the name of the artist, had said, “he was not one of our majors”.

To this day I remain puzzled why Norman Carter’s name seems to have slipped from our artistic heritage, while most of his contemporaries have held their place. His name is linked, not only with those above, but also Dattilo-Rubbo, Max Meldrum and Florence Rodway. He held an appointment with the Royal Art Society of New South Wales until 1916. Yet even on their history page, while they mention most of those named in this post, there is no mention of Norman Carter.

A painter who was “not a major”, who wanted to paint a young girl, and who had ways of finding a willing and suitable model. A young girl who needed money and had a potential introduction through someone known to the family. Tempting, tempting.

Not conclusive proof that Lucy Creft was the sitter for “Study in Brown“.

If you are researching Norman Carter and stumble across this blog post, may I suggest:

Artist on Canvas and Glass: the Stained Glass Work of Norman Carter by Karla Whitmore, researcher and writer on stained glass in Australia.