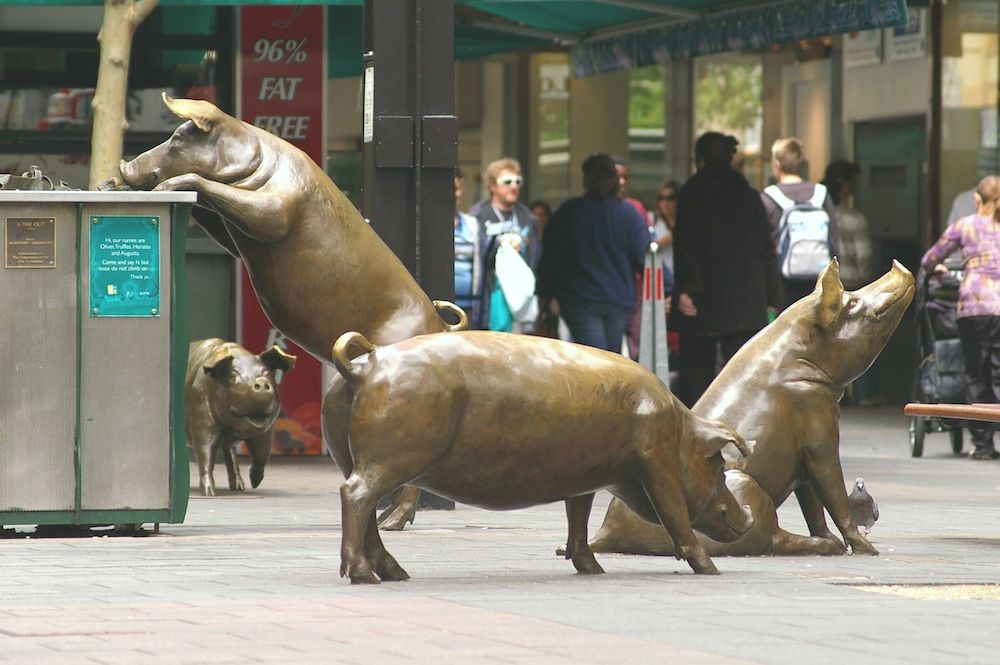 A Day Out by Marguerite Derricourt; Rundle Mall Adelaide. The four pigs are Truffles (the standing pig), Horatio (the sitting pig), Oliver (the pig at the litter bin) and Augusta (the trotting pig). Source: Pinterest.

Given I’ve been back from Adelaide for more than three weeks, it might be time to mention what I did over there for the 6 day writers’ festival (3-8 March 2018).

Last time I was in Adelaide we drove, (see the second half of that post); the time before we arrived by rail from Darwin; this time we travelled like normal civilised people and took a plane. Flight time is around two hours, and when you get there, you put your clock back a half hour.

This time I left Bill behind and went with three other friends. Unlike the four little pigs in the above photo, I shall not name our group, even though I am sure 🙂 (maybe) that they would like me to mention them. They might even like me to joke about what we may – or may not – have got up to together. But until I get a twitter account, that information is classified. What I will say is that we shared a city apartment and that went very well, and we made good company.

However, we didn’t always want to do the same things, or hear the same speakers, so here is a round-up of which talks I attended. My dedication was noted, so if you are not a confirmed bibliophile, you might prefer to give the rest of this post a miss. I thought about breaking it into several posts, but I have others waiting to be written. Maybe you might prefer to skim until one topic catches your eye.

I’ll add a link to each book in case you would like to learn more.

The festival is held in the Pioneer Women’s Memorial Garden where two stages are set up at a distance from each other. Sessions are run concurrently,  a total of fourteen sessions per day. The listeners choose their topic and assemble under the trees, the weather all week being warm to hot – even though 1st March is the official start to autumn . . . and . . . it is all free.

Due to the need to do all the necessary to check out of our hotel and get the flight back to Sydney, I also missed another talk that held promise: Anaesthesia by Kate Cole-Adams (AU) which includes “the astonishing fact that doctors don’t actually know how anaesthetics works“. As well as the research relating to the invention and use of anaesthetics, Cole-Adams explores the concept of consciousness. Something to sleep on perhaps?

And so we leave young Oliver, with his snout permanently stuck in the trough, which also serves as a litter bin in Rundle Mall. I am fascinated that no-one graffitis his hide with the names of out-of-favour politicians. Perhaps he is just too well-loved as he is . . .