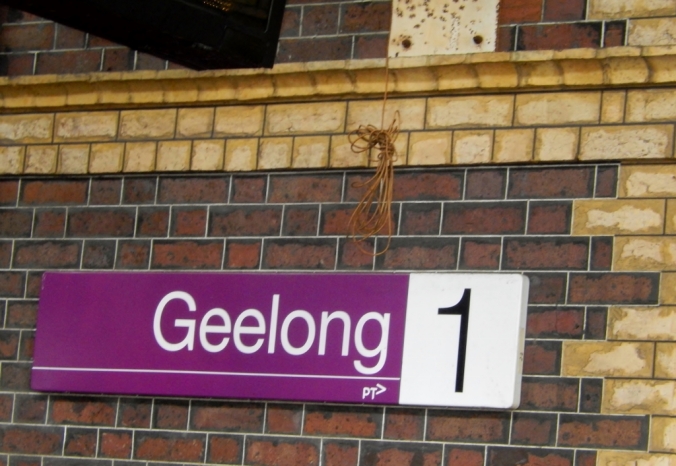 What a funny mish-mash of experiences we had on this day of our road trip from Ballarat to Geelong.

First up, we dropped in to have coffee with our friends from Adelaide who were also visiting Ballarat. They had driven over 600klm (375 mi) in a two car convoy with their daughter, son-in-law and two grandsons for a triathlon competition. For our part, had we driven directly from home, we would have covered 900klm (560 mi). Neither of us knew of the others plans, but a Facebook update caught my attention, and so here we are.

It was just as well they came in convoy, as the weather has been so foul that high winds threatened to rip the racing bike off the car roof, and that would have been a disaster. Luckily the second car could fit the bike, minus a wheel, into the back. The next threat was a gastro bug, which took the son-in-law down in a very bad way. He almost pulled out – but he is a determined person. He had already won the 2016 Empire State Building stair climb by dashing up 1,576 steps in just over 10 minutes, and now had his eye on qualifying for the International Ironman Triathlon to be held in Chattanooga, Tennessee in 2017. I am pleased to say his focus and grit paid off.

Fiona and I, meanwhile, were focused on how unseasonably cold the weather was. Even Bill is wearing a fleece in this photo. I am wearing several layers, including a cardigan over a woolly jumper, and thick pants. Fiona’s husband is the only one who is determined to dress for summer. It seems odd to be writing about it now, as we sweat through a hot and humid January. February used to be the truly humid month in Sydney, but it seems to have moved forward  . . . unless there is worse to come.

Geelong is only an hour down the road. I had a 2pm appointment but we had time to make a stop beforehand, and perhaps it doesn’t surprise too many people that the place I had in mind was the cemetery 🙂 The local cemetery trust has a fabulous website that enables you to find the exact location of the grave on your mobile device, but I didn’t master it on my first attempt. Eventually we gave up and headed for the appointment.

Geelong is a port city, and my appointment was at a private home on a high hill with an expansive 270′ view. We could look left across the bay towards our next destination, forward towards Tasmania, and right along the coastline that winds around to the bottom of Victoria. You can get a rough idea from the map at the end of this post.

I had come to see a railway enthusiast who is attempting to write a book of all the steam engine drivers of the area. My research had revealed that from the mid-1800s my great-grandfather worked as a clerk in the goods sheds at Ballarat, Geelong and Melbourne; and that he had a step-son who was a locomotive fireman. In 1887 the step-son was killed when he fell off the footplate of a moving train, striking his head onto the platform. He slipped while attempting to take the staff from the station master – an action which is demonstrated in this illustration I found recently, bottom right. 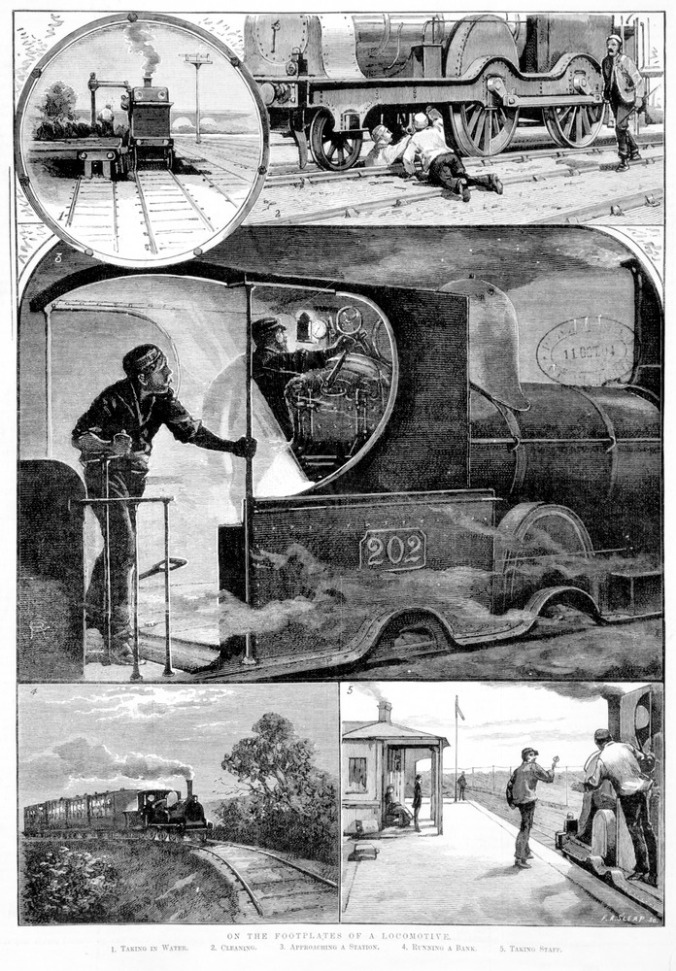 On the Footplates of a locomotive, Creator Sleap, F. A, Artwork 1885. Source State Library of Victoria

It’s a scene I am trying to incorporate into my current novel attempt. My fellow researcher mimed the action so I could completely understand who would have stood where, and why the stationmaster did not see the fireman fall. He also reminded me of a telling detail – all lighting would have been coming from kerosene lamps, so visibility would have been dim.

He also had many hardcopy railway ledgers, published quarterly or annually, and Bill kindly scoured these while we talked. Eureka! In one “Return of Staff” there was my g-g on his first employment, a sixteen year old clerk, employed in 1862 on 80 pounds a year. According to my maths, that’s 30 shillings a week. Happy to stand corrected! The photos below illustrate the way the record looked so you can appreciate how meticulous Bill had to be to spot it.

Another ledger, the Statement of Removals of Employees, recorded the demise of my unfortunate fireman. Under remarks, it simply says: killed. There are three other such unfortunates on the page. Other reasons for “removal” include resigned, deceased, dismissed, and – dispensed with – which sounds to me as if they were thrown on the scrapheap of life. Only two were “pensioned”.  And one exceedingly interesting record states “appointed commissioner”. Before the appointment he was earning 1300 pounds per year. The lowliest, a “boy” who was dismissed, was earning two shillings and sixpence a day. In the great ledgers of bureaucracy, it matters not whether you are at the top or the bottom of life’s ladder, alphabetical listing rules – thank goodness.

Our conversation descended into the detail of exactly which locomotive my fireman fell from. From newspaper reports, it is either engine #36 or #86. Out came more books! We never quite got to the bottom of that one, but you can see from the photos I have enough of an idea to serve my writing purposes. And I now know quite a bit about which companies made locomotives in this era 🙂 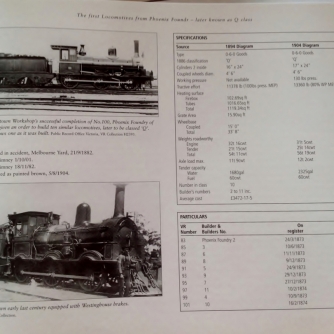 We toddled off then to book into our accommodation, and I took the chance to have a look at the cemetery location on the larger screen of the laptop. I thought I would have that locked in my head, but back at the cemetery for the second time that day we still couldn’t find our two graves of interest immediately. The problem turned out to be a broken headstone that was lying face down, plus the grave was turned in the opposite direction of what we expected. So here is the final resting place of the grandfather next up the line, Richard Creft, the one who had his geese stolen in the day before’s story. Plus of course, other direct ancestors, one of whom was born Caroline Toms Stranger if that rings anyone’s bells 🙂 . I spoke with the cemetery recently, and these graves remain in perpetuity, even though I know there are scant descendants remaining. So I suppose it is appropriate that we visited at least once.

Still on the trail of historical authenticity, we drove around places that I knew the ancestors had lived in Geelong. This is mostly drawn from funeral notices in newspapers, electoral records if they apply at the time, and trade directories. All turned out to be within blocks of each other, in an area which was then known as Ashby. I even knocked on the door of one of the houses, and the owner allowed me to take some photographs, which I will not post here for privacy. This house, and the one previous, were both named ESCA.  If anyone can suggest why, I would be eternally grateful. Is it something to do with Devon roots? Or literature, the arts, mythology, etc? It is not a name in the family, nor any acronym I can put together. At the moment, I have embroidered that it is an abbreviation for escape 🙂

Our walk down history lane would not have been complete without a visit to Geelong Railway Station. As we wandered the platform nearest the carpark, I was very lucky to bump into a railway employee who also knew his history. (Actually I accosted him.) He let me know that Geelong was the end of the line around the time of the accident so the station had to be re-modelled when the line extended. He also knew the site and layout of the now removed goods sheds. And finally, he pointed me towards an historical photo display inside the booking hall.

Aren’t the steam trains of yore just gorgeous? It reminds me of how envious I was of my brother over his Hornby train set. I have already written of my Bayko envy in a previous post.

Well, this is all very well, but Geelong is actually a visitors’ paradise with much to attract the modern person, and so far we hadn’t seen any of that.

So to end our day, we strolled along the esplanade in search of sight-seeing and dinner.  The area was packed with people picnicking, playing, strolling, singing, and partying at the various restaurants that line the esplanade and extend along the jetty. The waterside Christmas tree reminded us of the season. I was taken with the old wharf bollards which have been painted and decorated. Those of lifesavers pulling in the reel line over their heads are mimicking the action that Bill often did in his role as a volunteer lifesaver. I couldn’t get him to pose for a photo doing it beside these guys though. 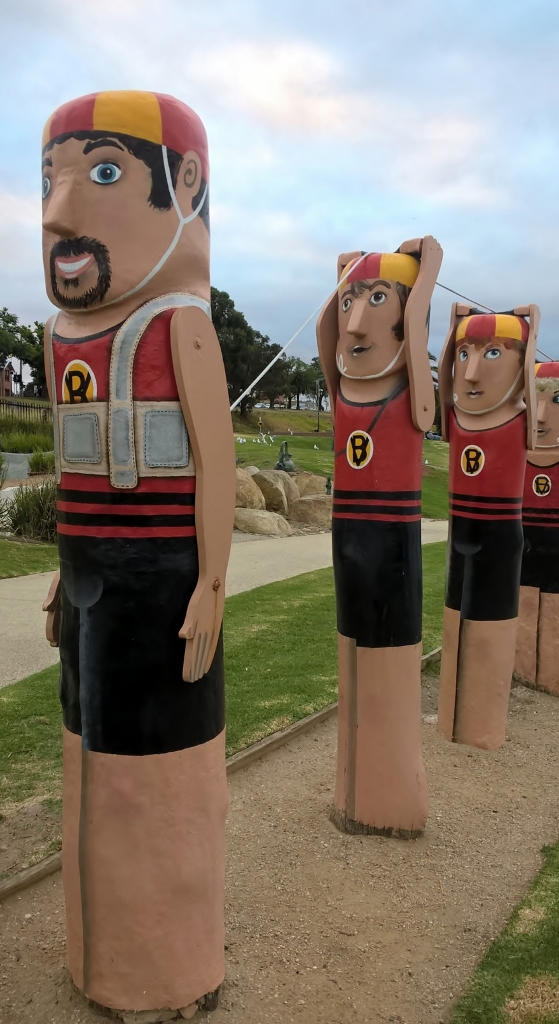 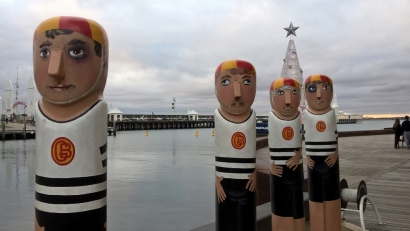 22 thoughts on “Day 8 of our Victorian Road Trip: Ballarat to Geelong”