Australia bears the honour of being the driest continent, while Western Australia and South Australia compete to be the driest state in that continent. When it comes to state capitals though, Adelaide is the hands down winner, and some months there is no rain at all. June is the wettest month however, and it seems all its 80 mm / 3.1″ average (source: Australia.com)  is trying to fall during our few days here.

In the early seventies I worked at a customs agency in Port Adelaide and a group of us former work buddies have stayed in contact. Bill and I need to be back at our hotel at midday for a group catch up. That still leaves time to explore a bit more.

Public transport within the city confines is free to all, and beyond the perimeter is free to pensioners and seniors during off-peak hours, even if you are from interstate. How good is that! So we hop on one of the “must do” tourist activities, the Glenelg Tram. This 15-kilometre (9.3 mi) light rail line is the last remaining tram track in Adelaide, and takes passengers from the Entertainment Centre on the city fringe, through the city centre and on to the popular beach-side suburb of Glenelg. We were grateful for the overhead protection as we waited . . .

Waiting for the Glenelg Tram at the intersection of King William Street and Rundle Mall.

King William Road becomes a Street within the city CBD. Don’t ask me why. It is a wide boulevard with shops and businesses on either side. On a corner near the above tram stop stands an historical building, circa 1895, known by locals as Beehive Corner. It has two facades, one facing on to the street and the other the shopping mall. In the below photo, Haigh Chocolates, founded here in 1915 and still family owned, is eclipsed by a sign for Pulp Fiction Comics. I see from their website they sell classics such as Asterix, and one of my favourites from America, Archie. Who is owning up to remembering Veronica and Jughead?

I mentioned in a previous post that Adelaide was a planned city, and its layout really is a credit to the foresight of Colonel William Light (1786–1839). This map, from Wikipedia, re-inforces its logic. The five green splotches within the pink grid are city squares. His plan became known as Light’s Vision. 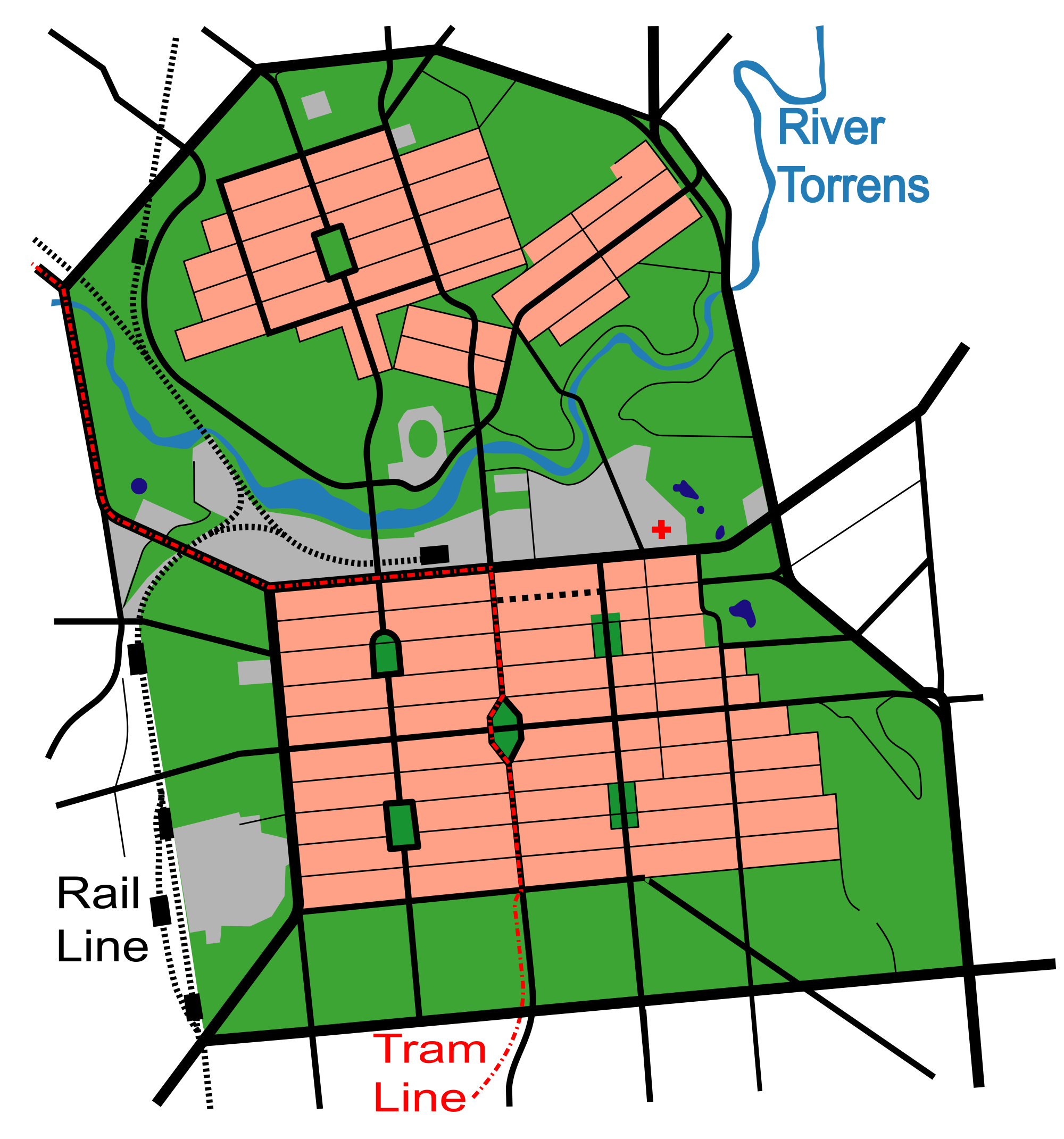 So, as we trundle along our track, the red line in the above map, we pass Victoria Square, which contains The Three Rivers Fountain commemorating the 1963 visit of Queen Elizabeth II and the Duke of Edinburgh. The fountain appears aptly named today. The good folk of Adelaide must have been quite proud of their royal visits, as that’s the second such nod to English royalty in two days.

The weather is suitably English as we continue towards South Terrace. In the background of the below photo is the tower of the General Post Office constructed between 1867-1872. According to Wikipedia, Prince Alfred, The Duke of Edinburgh, was involved in laying the foundation stone. I’m getting the feeling that the populace are monarchists! Perhaps it’s because they never took convicts, so maybe all the decision-makers were descended from well-to-do English settlers, those second sons who could not inherit the landed estates.

Once past South Terrace, the tram stops are numbered sequentially and with the name of the suburb, except for the one that services Morphettville Racecourse. This is the main horse racing track for South Australia. One of our travelling party had gone there the day before and done quite nicely I suspect. The tram terminates at Stop 17, Moseley Square, in the middle of Jetty Road. And here is what Glenelg Jetty looked like on this winter’s day. Although it doesn’t look it in this shot, it is 215 metres (705 ft) long, but it was at least a third longer in days gone by, before storm damage caused its reconstruction. It used to have a lighthouse at the end of it.

The founding fathers landed here, at Holdfast Bay in Gulf St Vincent on 28th December 1836, off the H.M.S. BUFFALO from Portsmouth with Captain John Hindmarsh and 176 passengers. 100 years later the Pioneer Memorial was unveiled.

Meantime, in 1875 an Institute Building was erected for education and so forth. It was converted to the Town Hall a couple of years later, and is now the historical museum, called The Bay Discovery Centre.

These two buildings sit happily side-by-side. All around, Glenelg and its beach side buildings and homes are modernising and presenting a gay aspect. . . When the sun shines. . . I can assure you, if you are in Adelaide, you will enjoy spending a full day in Glenelg. There are plenty of cafes, restaurants, bars, shopping, and, of course, the beach, the jetty and the historical centre.

On this day, we were happy to head back into town, rug up, meet our friends, and enjoy a wonderful lunch and catch up beside a combustion stove.

For Reference: We booked our tour through the Australian Holiday Centre.

12 thoughts on “Riding the Tram to Glenelg, South Australia, June 2016”