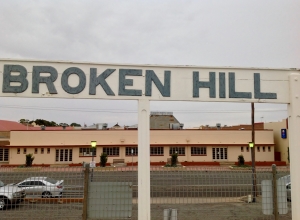 Day 9 of our Broken Hill adventure ends as it began. We re-board the Outback Explorer for our trip back to Sydney. This train leaves Sydney at 6.18am on a Monday morning and arrives at Broken Hill at 7.10pm (local time*). Then it turns around the next morning – Tuesday – leaving at 7.45am (local time*) and arriving Sydney at 9.30pm. (* half an hour behind the eastern seaboard).

We are barely aboard before there is a cheery “Good Morning” loudspeaker announcement from Bernadette in the buffet, who reels off a list of the items available for breakfast and lets us know she is on the run with us as far as Parkes.

As we trundle down the track, in the distance, there is low cloud and mist hanging over the Barrier Ranges, holding promise for more rain to come. On the drive from our motel to the station, Wayne has told us the deluge we drove through the day before yesterday has given Wilcannia three months of drinking water, a welcome respite from bore water. He told us also of the farmer who was just about to offload his lambs, but has decided to keep them after all.

Trundling further down the track, I spy glints in the red clay on either side, and as we reach them, I see they are small puddles of residual water. The creek beds that we saw on our drive to Menindee several days earlier now have muddy tracks running through them, and the stands of Red River Gums, which hint at the line of watercourses, look refreshed.

It doesn’t need much rain to breathe life back into the existence here.

All the same, as we pass the Menindee Lakes on our right they are still completely dry. They will need flooding further upriver to replenish.

Little by little, we are leaving the red dust and the salt bush of the outback behind. By 10.45 am we are at Ivanhoe, where we have a five minute break to stretch our legs on the platform. By 12.30 pm we are at the unpronounceable Euabalong West, and I eye the farming land and wheat silos. This, and the land we see at Condobolin at 1.15 pm, this is the countryside I thought I knew. I thought this land was the edge of the known world, until I went further west, to the land of the great outback.

They change the team at Parkes. I mean the human team. Not the horses.

By 4 pm we have reached Orange, and we reverse up the track again, until we are switched onto the Western line. We have officially reached civilisation. At least, so far as sharing a rail route is concerned.

At 4.45 pm, definitely once more in civilisation, represented by the platform sign Blayney, we are warned in no uncertain terms, “DO NOT get off the train!“. We are no longer free agents, with all the time in the world to kill. We are no longer the only train on this track. The only train which will come through once a week (that’s an exaggeration – but only a slight one)  Oh no. Au contraire. Blayney is serviced once a day. Every day of the week. And “he who is in charge of timetables“, would take a very dim view of us wandering off to who knows where . . .

Oh my goodness! The onboard staff come through for the dinner menus, and I don’t exactly know what came over us, but Bill and I have discovered the railway meat pies provided by Garlos. Oh, Lordy, Lordy, Lordy! Often-times I am asked as to what is the national dish of Australia, and there isn’t one, not exactly – unless you count lamb in all its varieties – but a meat pie comes close. And, this one is the ‘best of the best‘. It’s probably a million-quintillion calories, and there is absolutely no vegetable content whatsoever in the chunky meat version (in your wildest dreams), but railway food the world over has an abysmal reputation, so what should you expect? Well, the Garlo’s meat pie is not only edible – it is ‘to die for’! And I see they have a store in Los Angeles. And in case you are wondering, that odd sound on their website advertisement is meant to simulate the sound of tomato sauce being squeezed on top, (I think).

And! You can buy wine on-board the train, plus it comes in a gorgeous little bottle complete with a wine glass that doubles as the twist top seal.  I accidentally recorded myself saying, “I’m keeping that. It will be great sometime I want a snifter!” – but I will spare you that experience :-).

We are, by now, well and truly back in the land of rolling, forested, hills:

By 7.15 pm (Sydney time) dusk is falling rapidly.Shortly after the Zig-Zag railway at Lithgow we enter a series of long train tunnels, and within five minutes of exiting them, it is too dark to film.

(You’ve heard those radio plays when they say, “night fell?“.  So they were inspired by the short twilight in Australia. One moment you have “daytime“, and the next it is “night-time“. . . Goodness, I miss those long twilights in all those “Just William” books I read as a child. Set in the English countryside, he was forever being called into high tea consisting of jam, bread and crumpets, then next it was “supper” and, after all that, he was still out flying a kite when it was close on midnight!)

We still have a couple of hours of this train travel to go, back over the Blue Mountains and into the rush of the outer suburbs of Sydney, and before too long, the clutter of station after station of the inner suburbs.

Already I am nostalgic for the wide-open red spaces of the inland.

I am tiring also. After immersing myself in the experience, observing, interpreting and recording, I am starting to run out of puff.

We pull into Sydney Central on time, but our connecting train to home, an hour and half down the South Coast, is only an hourly service, and of course – Murphy’s Law – the previous departure was ten minutes before. It is midnight before we finally put our key in the apartment door.

. . . but we have returned different people, enriched by our experience.

Thank you to all who have followed and enjoyed this journey along with us. Thank you also for your comments and encouragement, both on-line and in person. It’s been a lot of fun.

32 thoughts on “The Return from Broken Hill”