Day 8 of our Broken Hill adventure is our last day in this fascinating outback city. We have finished the organised tours, so once again it is a leisurely stroll into town and a day left to our own devices.

In yesterday’s blog, I mentioned a plaque dedicated to Lieutenant Vivian Bullwinkel. This is one of a series of twenty-five which form the “Heroes, Larrikins and Visionaries Broken Hill Walk”. Although we glanced at some as we walked around, I didn’t read the accompanying brochure until I wrote this post.  One, labelled “Wild Women of the West”, says, “During the bitter strikes between the mine owners and the unions, the women stood by their men and tarred and feathered the scabs.”  What? I have stood on a picket line and stared sullenly at a bus-load of scab labour, but tarred and feathered them? Are you kidding me? I wouldn’t know where to start – even if I had the will.

A noticeable thing about the walk is that a good portion of the plaques are dedicated to women, who are often overlooked in other public displays for posterity. For example, the old Department of Lands (aka Land Titles Office) in Sydney – a stone colonial building pre-dating Federation – has niches for statues on all four sides. They ran out of money before all were filled, but every statue that does exist is of a man. Admittedly, most of them are early explorers, but surely there was room for at least one pioneering woman? So all hail to the recognition of the female spirit in Broken Hill, which includes Dame Mary Gilmore, who among several other claims to fame, was the first woman to join the Australian Workers Union, and appears on our Ten Dollar note.

We pass the Community Cultural Centre which is decorated with murals of more recent characters and events. All fourteen are painted by Geoff de Main. In my sample photos, the man leaning on a fence having a beer and a cigarette is his neighbour, the ladies with the clothes are volunteers at the local opshop, and the third is depicting an element of Aboriginal culture. (click once to enlarge)

Not far away, our meandering leads to the City Council Chamber, which I believe is referred to by locals as “the bunker” for obvious reasons if you take a look at the photo. Outside, there is a row of bust sculptures, this time of the Syndicate of Seven. Back in 1883, when Charles Rasp discovered ore on George McCulloch’s property, the latter suggested that a syndicate of seven station employees be formed to develop the claim. They complied, and if you are interested in whether fame and fortune favoured all seven, you can read more here. 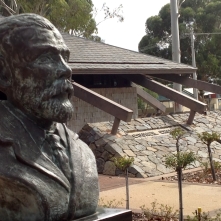 Then we reach the Sulphide Street Railway & Historical Museum. 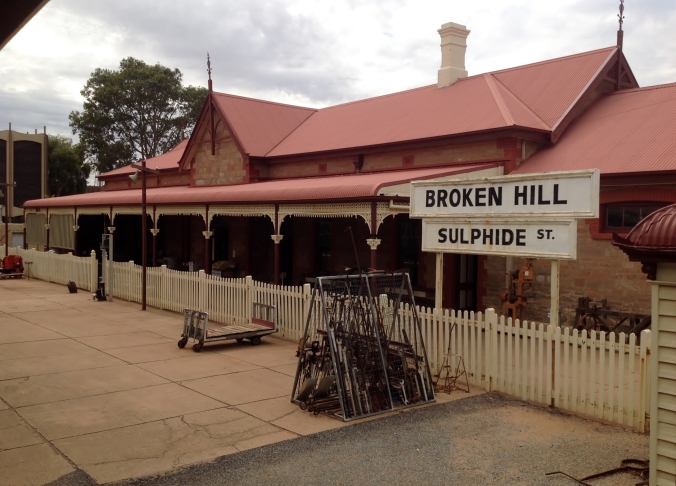 This was the railway station for the Silverton Tramway Company which operated from 1888-1970 until the rail gauges between New South Wales and South Australia were unified. This complex is many museums in one: the Hospital Museum and a Minerals Display for example. Well worth a good look around is the Migrant Museum, telling the story of so many people who made the trek from all parts of the world to call Broken Hill home. Can you imagine bringing your new bride from the fertile valleys of Europe to a tin shack in the arid desert of the Australian outback? Many did so!

There is plenty of rail memorabilia on display too. The Silver City Comet operated from 1937 until 1989. Its claim to fame was that it was the first fully air-conditioned, diesel-powered train in the British Empire. If you don’t mind a touch of colourful language, you can read the reminiscences of a former employee here, including “they were the happiest years of my life“, even though the ride was “as rough as guts“.

The external appearance reminds me of my childhood train trips to my aunt at Tascott on the Central Coast of NSW. I clearly remember the round window and large step up to the carriage, and inside the seating was on green leather-look seats. In those days, Tascott station was just a small unattended platform with only a stop on request. Passengers had to get off two stations before at Woy Woy (queue Spike Milligan), run up to the driver and let him know our destination. Once off-loaded, as the train sped away, we had to hold out our ticket and the guard would snatch it out of our hand as he leant out of the last door of the train. The Broken Hill museum has drawers full of the old fashioned cardboard tickets, so I souvenired a couple of them just for old time’s sake.

We headed off for a long lunch with our friends who had moved out to White Cliffs all those years ago. I had last seen them as guests at our wedding thirty years previously. So there was a bit of catching up to do! While there, I bumped into a person who had been on the panel with me at my author’s talk earlier in the week. She is a solicitor in the child protection and family court arena. Twice now, my library talks have been the catalyst for bringing together professionals working with family and domestic violence. The Broken Hill talk had included police, womens’ refuge, and counselling personnel, as well as the legal service.

Then we headed off for the Broken Hill Regional Art Gallery, and just outside we bumped into Wendy Martin, whose gallery we had visited earlier in the week. She and her artist colleagues were just packing up their pieces which had been on display in the gallery. So we got to view hers in her car boot!

I have never been in a gallery when it is in the midst of switching exhibitions before. That in itself was interesting, and gave us a chance to talk with the curator and other workers, as well as view the permanent displays. The building was originally built as a shopping emporium, and the name of the Sully family (1885 -1925) is still painted on the outside. Also outside, is more of Geoff de Main’s work, this time in sculpture form.

As we made our way back to our motel for our last dinner of this wonderful trip, we took one last photograph of the Line of Lode dominating the Broken Hill skyline:

39 thoughts on “Bumming Around in Broken Hill”