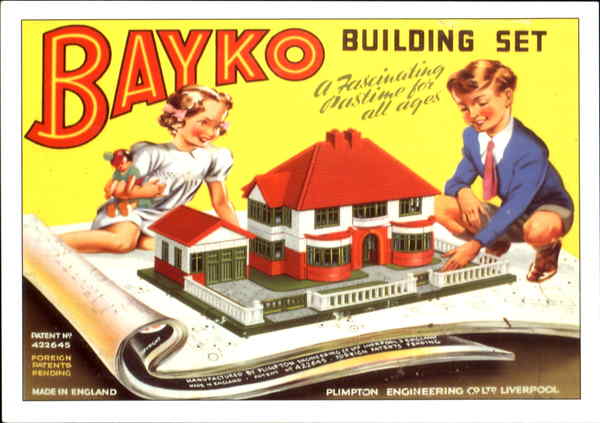 There is a scene in I Belong to No One where, as a sixteen-year-old with time on my hands, I drag out the toys belonging to my nine-years-older brother without his permission. I spread out his Hornby rail track and engines. I build signals and gates with his Meccano set, and I drive his Dinky toys from their garage to the railway station, both of which I had built from his Bayko set. It was an engineering marvel, but when he returned that evening, my brother was not impressed. Not one little bit. The subsequent furore tipped me over into leaving home for some months. You’ll have to read the book to know how that panned out 🙂

Well, bygones are bygones, there’s been a lot of water under the bridge since then, and we are both grown-ups now. Most of those toys have gone to auction or disappeared, but when my brother offered me the Bayko recently, I grabbed it willingly. They say “patience is a virtue”, but, oh man! Fifty years was a long time to wait.

I advertised that I would unpack the set in the craft room, expecting to get mobbed by a bunch of men keen to re-live their childhood. To my surprise, not one of the other residents I spoke to remembered Bayko. Yet they all had a Meccano set as children! Both “toys” originated in England, and I imagine were imported to Australia by the same company, so am not sure the reason behind that.

So, just in case other readers are similarly mystified . . . Bayko is an architectural building system, used for constructing model houses, shops, stations, and so on. Bayko was manufactured from bakelite and was marketed from 1934 to 1967. It was invented by Charles Plimpton in 1933, who set up the firm of Plimpton Engineering in Liverpool, England. It was taken over by Meccano in 1960, following the death of Charles Plimpton. I imagine it was a good fit for that business. Meccano was invented by Frank Hornby, who is also responsible for the Hornby Model Railways and Dinky cars which were the other trophies belonging to my brother (he had, for example, an extensive collection of the Dinky military vehicles).

For the enthusiasts  . . . My brother actually had two Bayko sets: the No. 3 standard set and the 3x converting set, which upgraded the whole thing into a No. 4. This means that the sets date to the early fifties.

The boxes had not been opened for many years, so the first task was to wash the contents and lay out what was there . . .

BAYKO set washed and sorted after many, many years in the carton (October 2015)

There is really no end to what can be constructed, and clever children use their imagination, but I was pleased to find the model booklet was still in the box. There are around forty plans already plotted out . . .

BAYKO set – found the plans and assembled the base, a good start (Oct 2015)

We chose to go with the plan pictured on the box . . .

Choosing a model to build from a BAYKO set (October 2015)

A closer look at the plan. It looked confusing for a moment, but it was not long before it was all coming back to me . . .

I remember how to read a BAYKO set plan

BAYKO is constructed on a bakelite base. There are eight in the set, and the first step is to screw the correct number and configuration together. Second step is to insert the correct size stabilising rods, very similar idea to building on a cement slab and timber studs and joists in home construction. I built the garage completely first. I figured “one small step for wo-man”, before I leapt into the big deal.

Off to a fabulous start, garage built, foundation for the house in place (BAYKO Oct 2015)

The set includes many realistic pieces: bay windows, single windows, windows that can open sideways, and so on. The bay windows can be a little fiddly to secure correctly.

I got so engrossed in the build, I forgot to take progress photos. The second storey is constructed by threading a floor onto the rods. My memory told me it was made from celluloid, and I expected to find all the floors in little pieces. I was happy when I discovered it to be another type of bakelite, almost like the shellac jewellery of old. Before installing the floor, it’s best to insert metal tie bars, straight and corner, over the bricks that are already in place. These had a lot of surface rust, but that didn’t affect the overall outcome.

When I first put it together, I had a space between the gates and the balustrade fence, and a lot of what I took to be broken fence pieces. Once I slept on it, it dawned on me that they were the moulded pieces to fit around the fence post. And I have just noticed that in the below photo, the roof has shifted slightly. It does fit neatly on the bricks.

This model uses only a small portion of the pieces. There are more roofs, and decorative pillars for example.

And lastly, a word from the manufacturer . . .

Clean, hygienic and easily sterilized by placing in diluted antiseptic, these Sets are ideal for children incapacitated by sickness or disease.

Yeah, right. If you can drag them away from the electronic toys that is!