In May of 2012, I sat my final university exam.  I had been studying for two years as a part-time mature-age postgraduate student, during which time I discovered that Uni consider mature age as twenty-five, not fifty-five. (Going to Uni was a bucket list item. I didn’t actually have an undergraduate degree).  I was due to start a new corporate job a few weeks later. Due to the dearth of such positions in the Wollongong area, it meant that I was going to live in Sydney during the week, and only come home on the weekends.

So Bill planned one more road trip, thinking it would be the last we could fit in for some time. We decided to follow the course of the Murray River for as long as time would permit. 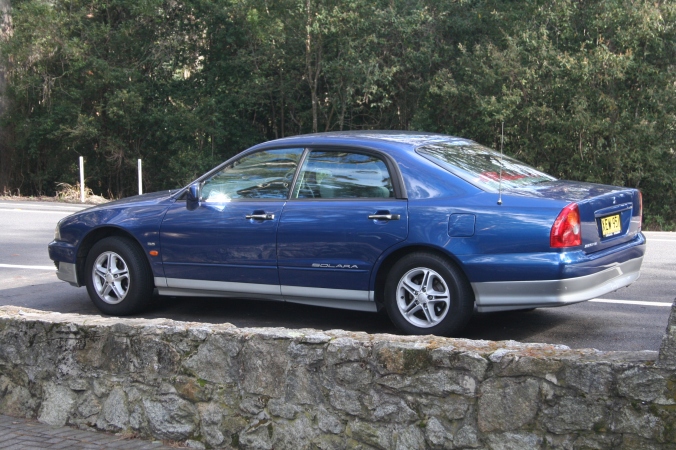 The beast is raring to hit the road

The mighty Murray River is Australia’s longest river – 2,508 kilometres (1,558 mi) in length. It rises in the Australian Alps, forms the border between the states of New South Wales and Victoria, and then flows into South Australia, reaching the Southern Ocean (really the Indian Ocean) near Goolwa.  It is heavily drawn on for irrigation, and its waters feed the nation’s food bowl, for example, rice and citrus fruit.  There is controversy about how much water actually reaches the mouth, and lakes that were once fresh, are now often saline. As a nation, we do not hold the high moral ground on environmentalism, however I am no expert to enter that debate. I will stick to describing our journey.

Unfortunately, I did not keep a diary on this trip, so am forced to reconstruct from a map and photographs.

This time, after leaving Narooma, we headed a little further south to Bega. The Bega Valley is dairy country, lush green rolling hills, with forested mountains in the distance, and a brilliant blue ocean to the east. They call this part of the coastline, the Sapphire Coast. Dairy = milk = cheese, and in this part of NSW, Bega and Bega Cheese are synonymous.

The Bega Cheese Heritage Centre offers visitors the chance to sample cheese and follow the history of this area. It also doubles as the tourist information centre. We planned to take an unusual route into the Alps, and called in to find if the road was open and drive-able. It showed as dirt on our map, but Bill thought he had heard it was being upgraded. Bill was in a talkative mood, and it was not long before he was showing the attendant another of my bucket list items – modelling for advertising.  My most recent attempt was in the current batch of ladies magazines that they were selling. Before I left, she had me sign a few copies. My first fan club!  Pity it was an ad for incontinence pants. 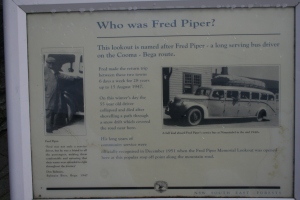 We set off through the scenic Bega Valley, on the road that connects Bega and Cooma. Before too long we found ourselves pulling in to the Fred Piper Memorial Lookout, near the Brown Mountain Flora Reserve. International people are often surprised to learn that Australia does have an Alpine area.  Well, Fred Piper’s story embodies the reality of the climate of this area.  A Cooma – Bega passenger bus driver for 28 years, he died of a heart attack while digging a path for his bus through a snow drift on the Snowy Mountains Highway.  The plaque was erected as a tribute by the Monaro and Far South Coast residents. 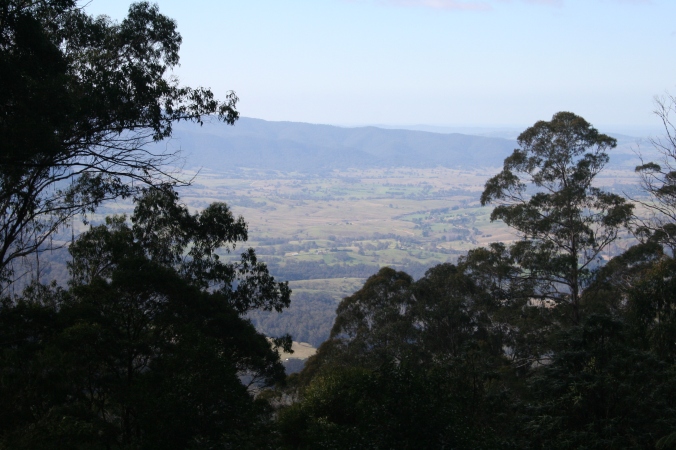 Looking across the Bega Valley from Brown Mountain 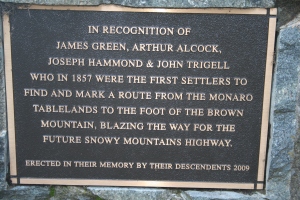 A short distance from this lookout, the road splits.  Two years ago, we turned in the direction of Tumut via Cooma.  This time, we turned south towards Ando, to join with the Snowy River Way.  This was the road we hoped was upgraded, and to our pleasant surprise, the works had just been finished.  This is not the most remote road in the Australian Alps, but you could describe it as one of the wilderness adventures, winding through high country into Jindabyne, which is the gateway to several ski resorts of the Kosciuszko National Park, including Thredbo and Perisher.  The architecture and atmosphere of these villages evoke an Austrian feel. 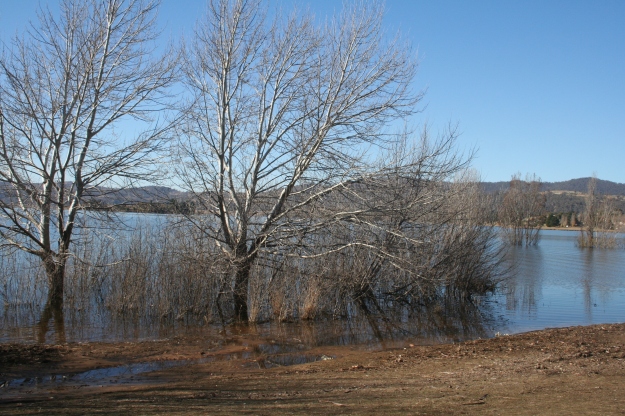 A glimpse of Lake Jindabyne in late autumn

On the other side of Thredbo, the road becomes the Alpine Way, and the scenery becomes more remote, mountainous and wooded. A bushfire had come through here some years before.  The land was still scarred, regeneration is slower in these cold, high conditions. This is the land of the brumby, wild horses made famous in legends such as “The Man from Snowy River.”  We passed through Khancoban, headed for Corryong. 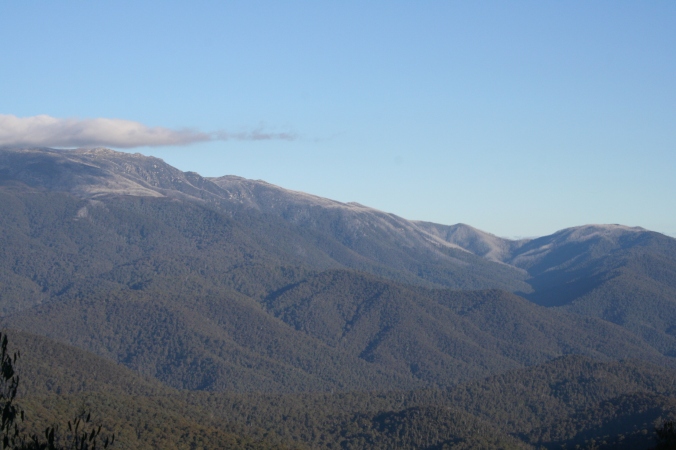 Technically, we had already passed the point where the Murray River rises, however we would have had to leave the car and hike into the mountains to find the true source. Corryong was the nearest “civilised” place we could use as our launch point.

Corryong is described as the home of the ‘Man from Snowy River’ legend.  Based around the story of a young mountain boy who manages to rescue a prized racing colt from running away with the wild horse mob.  It seems true that the character on which the poem and movie were based did live a reclusive life in the area.  Not too many other people live here – it a small town of 1200 people, very cold, and with not a lot happening in the place, given that we had arrived out of season. Summer is finished and winter has not begun.

From the moment we arrived anyone we spoke to warned us about the “mist in the morning”.  We walked down to a local club and had a chinese meal in the restaurant there, and were warned the “chef was finishing early because he wanted to drive to Sydney that night – to avoid the ‘mist in the morning’.  On our walk back the night sky was clear and intense, as there was little in the way of street lights, and we could see the milky way and all our southern constellations very clearly.

We had trouble finding accommodation, as most places were closed for the off-season. Eventually, the owner of a B&B opened one of her five bedrooms – just for us. When we arrived home, our hostess had a fuel combustion stove warming up the place, and she had a story to tell, all about she and her husband separating after many years of marriage, and he going to the Philippines to bring back a new bride, and how she – the soon to be ex-wife – had come back to stay at the B&B to make sure she did not lose her ownership rights.  There was quite a lot more to the story, it was an amusing, but slightly sad tale.  They have the B&B for sale, but no-one wants to come to such a lonely and cold place it seems.

Anyway, we spent a warm and cosy night in our very comfortable room and then accidentally got up an hour earlier than we meant to, because we mistook the alarm time.  When it was so dark outside we thought that was because of the “mist in the morning” – of which there was plenty!!  There was some confusion before we realised that we had risen so much earlier than planned.  Anyway, the light did come up in the morning sky, so we took a little walk around the town before breakfast.  A nice enough place with a small modern hospital, but obviously the type of place that attracts people who are looking for somewhere cheap to live.  What we did love about Corryong was the autumn colours on the trees. 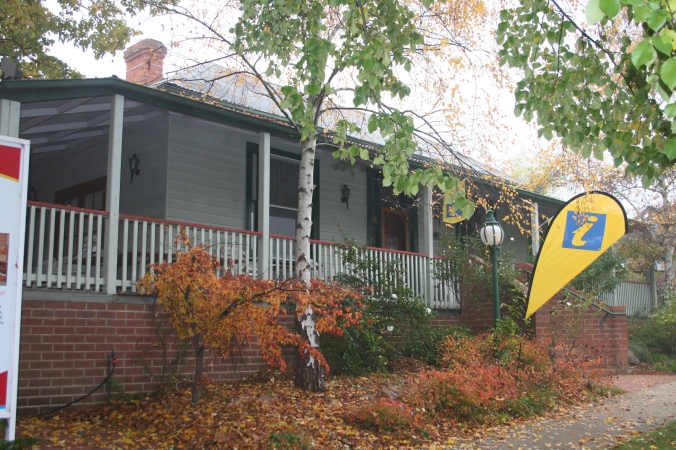 8 thoughts on “Following the Murray River: Narooma to Corryong”