In this series of posts, I draw on diary records to recount some of the road trips we have taken in recent years.

Bill planned this trip around linking up with various family and friends, and now we are a hop, skip and a jump away from his brother and sister-in-law, who run the post office in Branxton.  We turn south-east and drive for a couple of hours.

Branxton is at the northern end of Wine Country Drive and is the northern gateway to the world renowned Hunter Valley. Towns are clustered closely together in this area – which is dotted with small and large wineries, specialist restaurants, galleries, and craft and antique shops. The area is green gently rolling hills, covered of course, mostly with vineyards.  Shiraz and Semillon, Chardonnay, Cabernet Sauvignon and Pinot Noir are some of the varieties grown here.

Many Sydney-siders come to the Hunter Valley for a weekend.  Readers may recognise long established wine-makers such as Drayton, Lindeman, McWilliams Mount Pleasant, Tulloch, Lake’s Folly and Tyrrell.  Newer plantings from the likes of Brokenwood Wines, Don Francois, Allandale, Petersons and Bimbadgen can also be found. 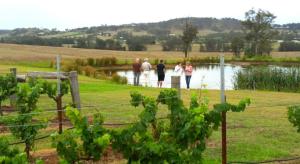 The Wine Wankers is a fun blog that I enjoy following, and last December they featured a post on a trip to the launch of the Brokenwood Graveyard Shiraz.  It was a fun day, and you can read more about that here: http://thewinewankers.com.au/2013/12/17/brokenwood-graveyard-launch-i-just-wanna-commute-to-my-destination-in-a-civilised-manner/

One of the items in Branxton of great interest to me is Leconfield House. It was built in 1872 for Reginald Wyndham, son of George Wyndham, founder of the winery Wyndham Estate. The home is a white two-storey brick home with a red corrugated iron roof, stone foundations quarried near-by and hand made bricks made and fired on site.  Many, many years ago I knew the couple who owned it as a private home, and had the pleasure of visiting there.  I love these stately old homes, with their large rooms, high ceilings and fireplaces, and it is such a delight that the people who subsequently bought it were able to renovate it, and now run it as a B&B.  One weekend, a group of us booked out every room, all five of them, and had a wonderful couple of days living it up in grand style. (http://www.leconfieldhouse.com.au/) 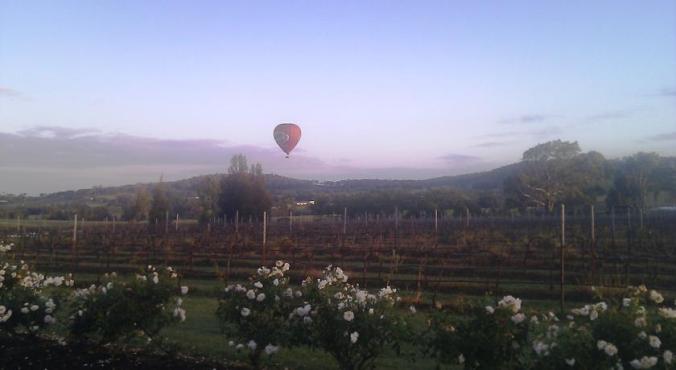 Back with the in-laws, we had a “home night”, dining and drinking and watching a bit of television.  The next morning Bill and his brother headed off to watch a golf pro-am championship that was on that weekend at Branxton.  On a previous visit, there had been an opportunity for regular golfers to play a round with the professionals.  Sister-in-law and I called in on our way elsewhere, just in time for me to see Bill duff his first shot of the day. Bill plays an awful lot of golf, several times a week; and he has been playing at least once a week for thirty years.  I don’t often go to watch him, and seeing this particular shot did make me wonder whether, “Honey, I’m off to golf” is actually just a cover for some other activity he doesn’t want me to know about 🙂

On this day, sister-in-law and I headed for a glass blowing studio – the Ogishi Craft Centre. http://www.ogishi.com.au/  The workmanship and design were divine, and I hoped to get something handmade for the apartment here.  I was out of luck for what I wanted, but I managed to get a nice gift for her, in time for her sixtieth birthday the next weekend. Anyone visiting these areas is recommended to take time away from the wineries and explore what the various artisans have on offer, and Ogishi offer an on-line store also.

All along our trip, the pets have been as much a personality as our hosts.  This couple used to own a pet shop, and the house used to be full of dogs and cats and other assorted animals – including a rat if I remember correctly.  All of them have died over the years, yet on this weekend they were baby-sitting a miniature collie dog for a friend.  So we weren’t without animal company on this stop either!