Approaching the castle – (there are much better photos on the Internet)

The tourist brochure says that “Henry II built the present castle of Dover in the 1180s, and that over the next 800 years its buildings and defences were adapted to meet the changing demands of weapons and warfare”.

Continuing on from yesterday’s visit to the Hurricane and Spitfire museum, we have come to Dover Castle today to see its ‘Dover at War’ exhibition, which takes us into the secret wartime tunnels.  I never knew that there is a network of tunnels built into the chalk foundations of Dover Castle, and I suspect there are others who are also unaware.  They date back to at least the time of the Napoleonic Wars, when the military build up sent to Dover to protect the English coast far exceeded the amount of billets available for the soldiers.  So the idea was formed to build tunnels and accommodate the men and their equipment inside these tunnels.  The first troops were accommodated in 1803. At the height of the Napoleonic Wars, the tunnels housed more than 2,000 men and to date are the only underground barracks ever built in Britain.  It can not have been comfortable inside, however a display of soldiers’ uniforms, conditions and rates of pay through the decades shows that they were at the bottom of the pecking order so far as desirable jobs go.  A facsimile of a diary entry records the collapse of a tunnel and that it suffocated the occupants. 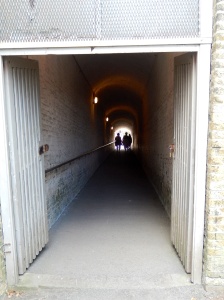 At the end of the Napoleonic Wars, the tunnels were partly converted and used by the Coast Blockade Service to combat smuggling.  From 1827 the tunnels were abandoned for more than a century.
With the outbreak of war in September 1939 the tunnels were put back to use, and the evacuation of Dunkirk was managed from a command centre deep inside them.

The drama is brought to life on a guided tour through the tunnels.  Operation Dynamo: Rescue from Dunkirk, uses original news-reels and recordings, testimonies from veterans and dramatic special effects to recreate the events of the ten days in 1940 when Vice Admiral Bertram Ramsay led the evacuation strategy.  He masterminded the rescue of 338,000 troops from his Naval HQ in the tunnels below the castle.  This was a brilliant tour, well worth the very long wait (around hour and half) in the queue outside. 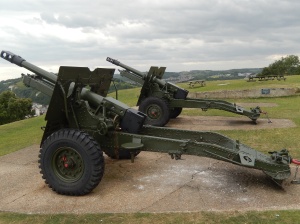 We also queued to see the separate display of the Underground Hospital.  It was constructed in 1941-42 as a medical dressing station for injured troops.  The audio-visual special effects are supplemented with the smells that could have been expected at the time (let’s hope mostly cooking smells, as there was a hospital kitchen underground  as well).  The tour included an operating theatre, the kitchens, and the dormitories for the women of the Women’s Auxillary Air Force (WAAF).  Again, not very salubrious, and working out of daylight most of the time, it cannot have been comfortable for them. 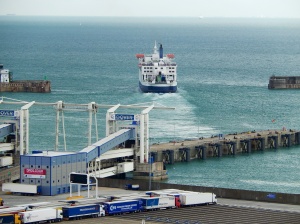 Another ferry in Dover harbour

There is much more to Dover Castle.  It is an English Heritage site, and they have divided it into five areas.  For example, visitors can explore medieval court life in the Great Tower, or look at defences of the thirteenth century.  It would be a challenge to see everything in one day, particularly if the queues are long as on the day of our visit.

Overlooking the township at Dover harbour 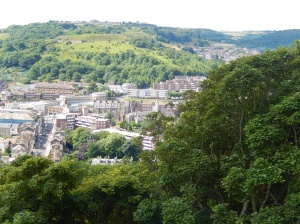 Close up of Dover town inland from the port

Dover Castle is one of the largest castles in the country, and it is strategically located at the shortest crossing point to continental Europe.  It dominates the cliffs above the township of Dover.  The township is unremarkable, apart from the steady stream of ferry and trucking traffic, which is quite impressive!
Tuesday 13th August 2013, Garrulous Gwendoline, Dover, England