We have two choices today, to take the train or the bus from Sarajevo to Mostar. 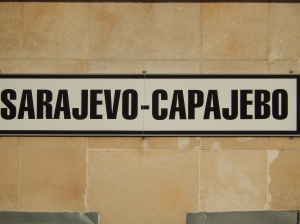 We choose the train, as the view through the mountains and alongside the Neretva River are spectacular, so we are told.
However there are only two trains a day, around 7am and 7pm.  None of us can get enthusiastic about an early start, and we justify to ourselves that dark does not fall until eight-thirty or nine, so we will see plenty in the evening.
Bill and I venture out on another tram ride, a scouting expedition to check that the evening train really is running.  One can never be sure in this part of the world.  We are told to take the number one tram to the end of the line. We get to a stop where everyone remaining on the tram gets off.  A woman calls out to me to do the same, but I can’t see the railway station. So I go forward to check with the tram driver, who tells me it is the next stop, and just at that moment the ticket inspector gets on.  Bill and I are fine, we have legitimate tickets that have been correctly punched through the on board machine, but I wonder if everyone else was in the know about travelling without a ticket.  Public transport is super cheap, but times are tough here.
At the railway station I stumble through my request for tickets in rusty Serbo-Croat that is referred to as Bosnian here.  The ticket attendant is a helpful older woman who would have attended school when Russian and German were compulsory languages, not English.  She beams at my attempt, and patiently coaches me through.  She confirms the train, but warns me it is liable to be late.  It is the “fast” train, but it is coming from Zagreb, and in the intense heat the tracks expand and the train has to slow down.  I am not sure whether this is the explanation for the train being rescheduled from 18:18 to 18:57, or whether she means even the seven pm train might be late.  By the end of the day I know which is correct 🙂
Back in Sarajevo old town, we find Sunday is a slow day.  Many of the market stalls I wanted to have another poke through are closed.  Seeing their wooden doors shut and bolted only serves to demonstrate how amazing it is that they can offer so many goods in such a confined space.  There is still plenty enough life around, it is just not as bustly as on other days.
This gives Bill and I the opportunity to go to a gallery that we had passed the previous day.  It contains an exhibition on Srebrinica.  There is a huge amount of information here, one explanatory mixed media collection alone contains four hours of viewing.  The are videos of the testimony from survivors, many of which were presented to The Hague enquiry.  We listened to one all the way through, a remarkable story. We have all heard the story of Srebrinica but it takes an exhibition likes this to transform news items into real people and individuals.  Helpful guides expand on the photographic exhibition.  If you wish to see it I recommend you allow a half day (we had not).  The entrance tickets are good for two days.
We said goodbye to our kind receptionist at the Old Town Hotel.  We have found all staff and guides to be exceptionally pleasant and helpful, with excellent English.  Nevertheless, we are still happy to get Jay to speak Bosnian when we are out and about elsewhere.  Having said that, the cafe across the road has gotten used to our order for ‘chicken salad’ no matter which language we use.  We went mad for cevapi (skinless spicy sausages) on our first night in Sarajevo, but have started to eat more simply – and this cafe cooks the chicken breast fresh on the grill.
We had time to kill, and shouted ourselves an ice-cream.  The young girl misinterpreted my request for two flavours, and I came away with an enormous mountain, two scoops each of two flavours.  As we sat and ate our ice-creams in the shade of the cafe, an old man overheard us speaking English and introduced himself.  He was a retired professor, a high school French teacher who had been evacuated to the US after the war, where he worked as a hotel porter, a driving instructor for the Bosnian community, and a pizza delivery driver.  After eleven years he and his wife decided to return.  He had lost everything he owned before the war, including his house, but had saved enough to buy a small apartment in Sarajevo.  His two children meanwhile, had established their careers in the States, and stayed behind to make their life there.  He recommended us to a tour agency in Mostar, telling us it was run by a woman who had translated for the French UN forces.  After an hour or so of pleasant chatting, we wished him well, and took our leave.
My helpful lady in the ticket office had finished her shift by the time we got back to the station, but her replacement assured us the train was on time – five minutes late at the most.
It was just as well we milled around at the station entrance for a while, because at the last moment, the departure platform was switched.  We would have been nicked if we dragged the suitcases up two flights of stairs only to have to bring them back down again, and up another set.  But my helpful lady had also warned me this could happen, so I had a heads up.  There are no indicator boards on the platform (there is almost nothing on the platform) so waiting on the wrong one could have given us a nasty shock.

Oh no! What have we got ourselves into here!

It was a funny circus up on platform two.  A train pulled in, around the right time, but some young uni students overheard our conversation and warned us it was not our train.  It was going to Zagreb, not coming from it.  But it wasn’t going anywhere in a hurry.  There was much uncoupling of engines (electric) and shunting around.
While it was still at the platform, another train pulled in on the opposite platform.  Two carriages, non-descript colour and covered in graffiti.  It didn’t look like any fast train I had ever been on, but we can’t expect too much under the circumstances.  Luckily, our uni students saved us again.  We never found out where it was going, except that it had to be a local train.  It looked as if it would be lucky to get twenty kilometres down the track.
Engines were being driven down the track, onto a siding and around again, and it was beyond me to work out what was going to pull which carriage.  Train engineers rode the side of the engine and jumped onto the platform athletically.  It must have meant something to someone, because eventually both trains left the station, and then hallelujah! – our train pulled in with two forward diesel engines.  It must have been sitting up the siding most of that time.  We each had our role to play in getting suitcases and backpacks on board, up the steep steps which seemed suspended in the air above the platform.  Waddy wants me to make special mention of his heroic effort in hauling the suitcases into the overhead racks in our train compartment.  Bill strategically positioned himself in the corridor, yelling encouragement such as “Hurry up, you idiot!”

Waddy is smiling now. More with relief than happiness. Note the position of the suitcases .

We lucked out on our scenic view to Mostar.  The train left around an hour late, the night was beginning to get cloudy for the first time in days, and dark came upon us earlier than we expected.  But we did get the excitement of a ride in an old compartment style train, whooshing through fifty-seven tunnels, a serenade from the drunk next door (which we did our best to return with old Beatles numbers), the sight of people stepping off the train and disappearing into the shrubbery, and a full moon glistening over the Neretva River.  Along the way, a shy young Bosnian accountant joined our compartment and chatted with us for a while.  He has a five day a week job, but it is three hours away from where he lives, so he goes back and forth on the weekends.  And, yes, he also had a story of lost childhood to tell.
The Villa Anri, the pension style hotel where we are staying in Mostar, had already sent us word that a taxi would be at the station to meet us, and there he was, a strong young man holding up a name placard.  He grabbed two of our suitcases and whizzed off with them, trailing us behind, and before too long we arrived at the hotel to a hugely warm welcome.  By ten-thirty we were on the rooftop terrace, sipping welcome drinks and eating nibblies, with a view of the Stari Most (old bridge), right in front of us.  That’s a tick for Waddy’s bucket list. 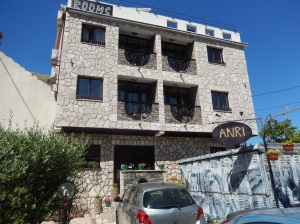 Stari Most from our rooftop terrace at night