Mostar is a somewhat schizophrenic town.  It is here that east meets west, jowl by jowl.  The prayer calling muslims to the mosque is matched by the sound of church bells calling the faithful to the Catholic Church.  In a single line of sight one sees a minaret with a huge white cross behind it.

The front line of the war is a Main Street a five minute walk from our hotel.  The war in Mostar started with  Muslims and Croats united against Serbs and Montenegrins, and finished with the Muslims and Croats turning against each other.  Bodies lay uncollected in this street for days at a time. We cannot imagine what it was like.  Admir told us the city looked like Hiroshima in the end, and we see many buildings that are still in a bombed out state.
Once again, we have taken a guide to show us around the town, and she explains that ultimately the UN controlled this street, with the fighting separating family members, and food shops from hungry people.  She tells us that you had to hand over identity papers when you crossed, and collect them on the way back.  The inference was that uncollected papers were an indicator that you had not survived the trip.
Like all the other guides and people in tourism, Annella is emphasising that they are trying to put the past behind them, and let go of any bitterness.  There seems to be an acknowledgement that everyone had a hand in what happened.  Tito preached a philosophy of brotherhood and unity, and anyone who was disgruntled with that was dealt with in the manner that is at the disposal of a benevolent dictator.  His death allowed those forces to come to the fore. 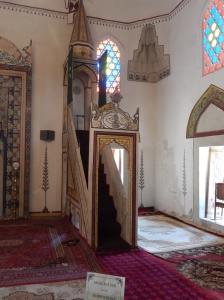 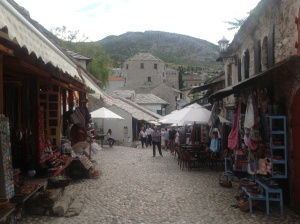 We move quickly into the old heart of the town and switch our focus back some hundreds of years to the time of the Ottoman Empire.  Annella takes us inside a mosque and explains the rituals that take place,  and she shows us the external of a hammam – a bath house.  Internally it is now a museum.  We step briefly into another museum to view clips from tourism of the sixties (looks like those smartly dressed Italians again), which culminates in video of the bridge being bombed out of existence.  It didn’t fall easily.
Then of course, there is the bridge itself, the Stari Most, or Old Bridge.  We are on it before we even realise, after wandering our way through the street stalls. It has been reconstructed using the same stone as the original, and it is extremely slippery.  Cross ‘bars’ of stone are every half metre.  It was designed to give the horses stability, but we are just as happy to have something to grip on too.

Dinner at the crooked bridge

We eat dinner beside the river at the Crooked Bridge – a smaller version of its more famous cousin.  One could say it was a prototype for the other.  The waiter brings us an mixed entree plate of stuffed vegetables, vine leaves, peppers, and the like; and we follow it with a platter of mixed grilled meats and chips.  We try another bottle of the Blatina red.  It is good, but we have not yet found the exact one we enjoyed at my birthday dinner.  I guess we are obliged to drink lots of red wine until we find the precise one again 🙂

Looks as if Bill and I survived another day together

Waddy’s reaction when Jay asked for a kiss

Many tourists who come to Mostar do so on a day trip, or stay one night at the most.  When we leave the next morning, after a three night stay, it is as if we are departing relatives.  We are given a gift of local wine each, handed over with kisses and handshakes, and the staff stand outside to wave off our taxi.  The Villa Anri has made everything easy for us, from collecting us at the train station (at their expense), to arranging tours and guides, and welcome home drinks and snacks on our return.  They have gone out of their way to be pleasant and helpful, and I hope the good economic times return for them soon.